The problem with everyone that uses idealized women’s bodies for their “sex sells” campaigns is that this is the least sexy thing they could possibly be selling. Messages that depict one narrow definition of “hot” and one way to think about, view, and use women — solely as an object for sexual pleasure — are actually damaging sexuality for both sexes by limiting what we perceive as “sexy” and keeping all of us preoccupied with looking “sexy” rather than enjoying sexuality.

Sexual objectification (ex: Carl’s Jr. commercials) is the process of representing or treating a person like an object that exists to serve another’s sexual pleasure. All hours of the day on mainstream TV, Carl’s Jr. among many others sells the common and dangerous lie that women are valuable for how sexy they appear to others. Because women’s sexuality isn’t for themselves, it’s for others’ viewing pleasure, right? Nope. We’ve posted about Victoria’s Secret, SI Swimsuit Issue, and many others, but today it’s time to talk about Carl’s Jr.

They teach boys and men that women are passive objects to be looked at and acted upon.*

They teach girls and women they exist to be viewed and they must judge themselves by their sexual desirability to others, rather than in terms of their own health and desires. And with that life-threatening line of thinking comes depression, eating disorders, shame, decreased cognitive functioning, sexual dysfunction and inability to find satisfaction and pleasure in sexual experiences.* Suuuper sexy, right?

They work as a tool used to dehumanize, control, and abuse women. Viewing someone as an object is “almost always the first step toward justifying violence against that person.” It makes it easier to mistreat women when they are seen as objects – not people.*

But Carl’s Jr. doesn’t care about the public health crisis to which they are proud contributors. When women complain about their sexist ads, CJ literally replies with, “You aren’t our target demographic of 18- to 35-year-old men so we don’t care.” They only care about money. “The people we wanted to target were young, hungry guys. …We target hungry guys, and we get young kids that want to be young hungry guys,” says Andrew Puzder, CEO of Carl’s Jr.’s parent company and newly selected Labor Secretary under President-elect Donald Trump. He told Enterprise in May 2015: “I like our ads. I like beautiful women eating burgers in bikinis. I think it’s very American. I used to hear, brands take on the personality of the CEO. And I rarely thought that was true, but I think this one, in this case, it kind of did take on my personality.” Congratulations, Andrew! Your brand of blatant, proud dehumanization of women – equating objectified women’s bodies with the meant he wants “young hungry guys” to consume – is the reason we have to fight for women to be viewed as more than just bodies. 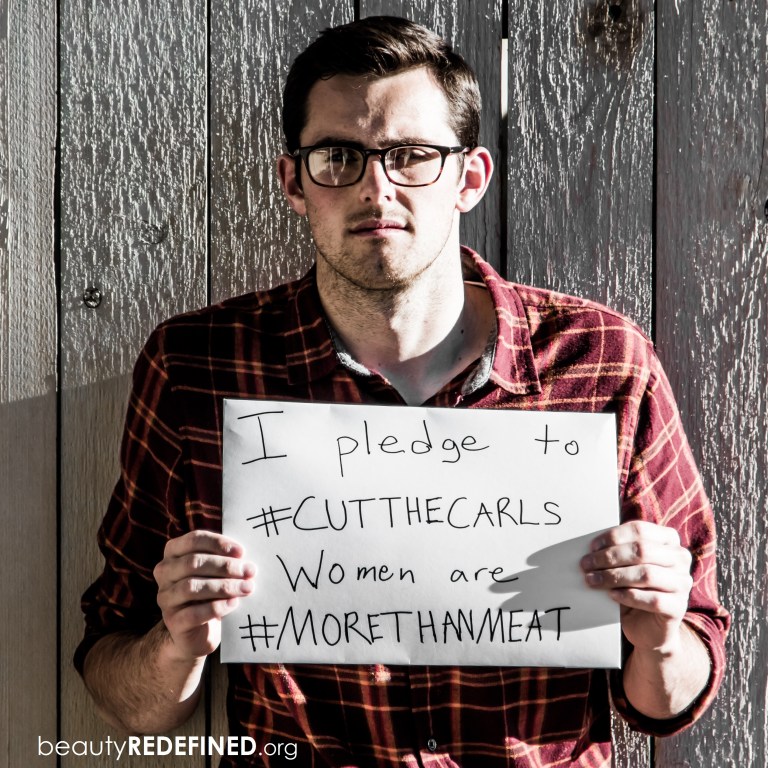 Since BR’s co-directors are women (identical twins Lexie and Lindsay Kite), Lexie’s husband Travis has decided to step up to the plate. Travis is a “young, hungry guy” who fits squarely within CJ’s target demographic of 18-35, and he’s taking his appetite elsewhere. Will you?

Why do things have to be the way they are? Why does our demographic have to represent the scuzziest our society has to offer? When advertisers want our attention their first move is to wave some form of sex in our face. Sure that’s a given, but it doesn’t have to be. They keep using sex because we keep taking the bait. Because, sex sells, right? And we hear that phrase a lot, but it’s a little misleading. The advertisers aren’t using sex per se; they’re using women’s bodies. They take women and strip them down (literally and figuratively), removing everything that makes them human beings, and for years we’ve essentially said with our dollars that we were cool with it.

So now we come to Carl’s Jr. They took what all the other advertisers had done, then they went a little further, and then they deep fried it. And it makes me sick. And if it doesn’t make you sick, then you should probably turn off your internet machine, think really hard about how numb you are to stuff that is doing a lot of harm, and just have a conversation with a real woman. And just maybe think for one second about what it means for women to turn on the TV and see basically every woman stripped down to sell you things. Things as stupid as hamburgers. Don’t you see it!? Women are more than objects!

Sure, Carl’s Jr. isn’t the only one out there pulling this sort of crap, but why not start by pushing back against a company run by guys like Andrew Puzder who are brash enough to combine women and meat and feed it to us like we’re animals. Let’s stop buying their hamburgers. You can stop until they change their campaign or you can stop for life (I’ll probably #cutthecarls for life because I think they’re a bunch of jerks). We never should have let it get this far. Maybe, like me, you’ve cared about women and how they feel about this sort of thing all your life, but have mostly been on the sidelines. Well it’s time to step up to the plate, son. Let’s “man up” (to borrow their marketing slogan) and close down some Carl’s Jr.’s. And don’t stop there. There’s a lot of this business of treating women like they’re something less than human beings. Talk to any woman and she’ll tell you about it. This is about a lot more than not eating hamburgers. This is about showing the women you care about (and everyone else) that you won’t put up with this demeaning crap. You ain’t gotta buy it. If you don’t want to help then … whatever. You and the guy who lives in his mom’s basement can go get some soggy burgers and talk about Transformers 5 to your heart’s content.**

Here’s how you can join us:

Check out part of our CNBC interview from September 2014 here. (Of course they featured a highly objectifying Carl’s Jr. ad for much of the segment, so be aware of that imagery. Feel free to listen, not watch.) Read Lindsay’s remarks in the Boston Globe on Dec. 10, 2016 about the Puzder nomination here.

Need help developing body image resilience that can help you overcome your self-consciousness and be more powerful than ever before? Learn how to recognize harmful ideals, redefine beauty and health, and resist what holds you back from happiness, health, and real empowerment with the Beauty Redefined Body Image Program for girls and women 14+. It is an online, anonymous therapeutic tool that can change your life, designed by Lexie & Lindsay Kite, with PhDs in body image and media.

*We won’t make you read our whole Ph.D. dissertations (Kite, 2013 & Kite, 2013), so we’ll direct you to this awesome report from the American Psychological Association that rounds up huge amounts of research on objectification and its effects on society here.

**We decided to leave Travis’s words unedited, though his last sentence is a departure from our regular tone. No offense to anti-objectification basement dwellers was intended. 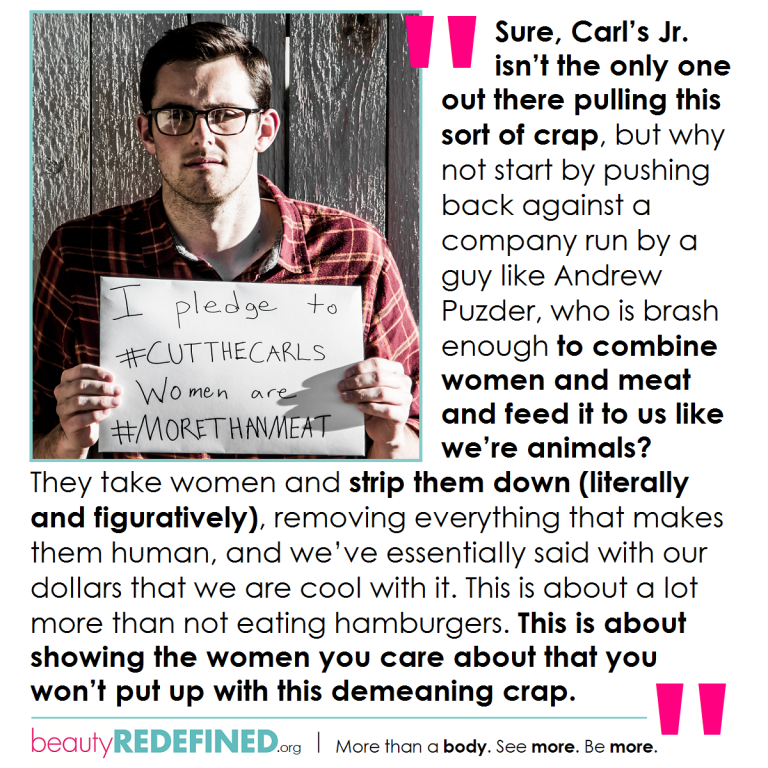