Empowering or Objectifying: The Clashing Camps of Body Positivity

Because our culture teaches that women’s bodies and faces determine our worth, and that only certain rare bodies and faces are worthy of anything good, people who want empowerment for women are stuck in two conflicting groups.

The first group seeks empowerment for women by calling out and fighting objectification. They push against the deeply embedded system that offers women fake, fleeting “power” for having a body deemed worthy of consumption — visually or physically. They teach women to see and value themselves and others as more than just bodies. That’s what we stand for with Beauty Redefined. We aim to redefine the meaning and value of beauty in our lives, not just what it looks like. We teach people how to recognize and resist harmful messages about beauty and then rise with resilience through the objectification we all face.

In this first group, there is no room for lingerie photo shoots or nearly nude selfies, no matter how different the bodies on display might look from media ideals.

We understand why the second group does those things.

Our profit-driven culture thrives off the objectification of female bodies, which harms all women, since we all fall short of manufactured beauty ideals simply by being humans and not images. We all fail in a system that values only our bodies at the expense of our humanity. But from a body image perspective, where our PhD research is focused, this ideal-driven culture causes particular harm to those women with bodies that look very different from cultural ideals. The second group springs from the truth that many women’s bodies have been erased or made to seem abnormal and shameful. These women want to *see* themselves as beautiful and they want themselves to *be seen* as beautiful by others. This second group wants others with similarly invisible shapes and features to see the bodies they never saw when they needed to see them. So, among other things, they share and celebrate nearly nude selfies and lingerie photo shoots featuring marginalized bodies. We understand why.

And while firmly claiming membership in the first group, we are happy for the young girls and women who can see their own perfectly acceptable physical realities reflected back at them through social media in ways we were never able to. Our unbelievably self-conscious teenage selves would have felt some relief from shame upon seeing those more familiar bodies celebrated by the first group. We’re grateful others can feel that relief.

We must fight body shame, but we need to fight it at its source: the idea that the appearance of our bodies is the most important thing about us. When we fight back by alleviating the shame surrounding certain body types, we’re only fighting a symptom of the problem, not the root or the real cause. The real problem is *not* that only certain women’s bodies are valued, it is that women’s bodies are valued more than women themselves. When we try to promote body positivity by focusing *more* on more bodies, we inadvertently perpetuate the idea that women are bodies first and foremost. The best way to fight body shame is by rejecting the lie that our bodies are the most important thing about us.

If this fight is really about empowering women, we have to be careful. We have to recognize how severely the objectification and dehumanization of female bodies has stunted girls and women. How the epidemic of self-objectification, or constant fixation on appearance (whether you like your appearance or not), has crippled generations of women who could have used that mental energy on much more meaningful pursuits.

We also have to understand where lasting, meaningful power comes from. It doesn’t come from believing that your body looks acceptable. While that is a good feeling, and perhaps even one step closer to empowerment, there is much greater power to be found *outside* the confines of woman-as-object, ready for evaluation and consumption. Women displaying their bodies and sharing them online — even if they look very different from mainstream ideals we’re used to — is still playing within the rules of objectification. That’s the same framework that has marginalized and oppressed women for as long as any of us can remember. It still depends on women being awarded arbitrary points for what their bodies look like, just with expanded guidelines for what counts as worthy of displaying or consuming. It’s still others consuming those bodies – looking, evaluating, validating (through comments, likes, shares, retweets) or, all too often, mocking and harassing. 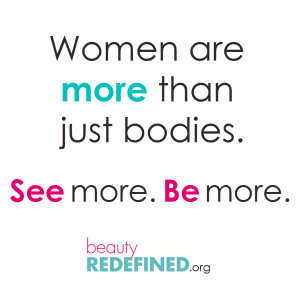 Women are more than bodies. We have to learn to see more in ourselves in order to be more than women who self-objectify our days away, preoccupied with our looks. Positive body image isn’t believing you are beautiful — in fact, it’s more like believing you are *more* than beautiful, that your body is much more valuable as an instrument for your use than as an ornament for others to admire. You don’t learn that from displaying your body or admiring others’ bodies, no matter what size they are. You learn that from living and doing and being, not from looking or being looked at. Having positive body image isn’t believing your body *looks* good, it is believing your body *is* good, regardless of how it looks. Believing you look good is nice, but it’s maybe the 139th most important thing to believe about yourself — even if your body has never really been regarded as ideal. You don’t have to see your body as ideal in order to feel great about yourself, have loving relationships and contribute great things to the world. When a woman truly believes she is worthy and valuable as a person, regardless of the way her body looks, she will experience far greater empowerment than if she simply believes her appearance is valuable.

They’re both working toward their own visions of empowerment for women. But we’re fighting different opponents. We in the first group firmly believe the opponent is objectification — the system that defines women’s value in terms of their physical appeal to others. The opponent is not mainstream beauty ideals. Beauty ideals suck, and today’s prized looks are as unattainable as they’ve ever been, thanks to easy digital and surgical modification. Beauty ideals will always be here in one form or another, but it’s the rules of objectification, which tell us women are first and foremost bodies, that hold beauty ideals in power. Rather than reinventing what constitutes “beauty,” why not push against the whole idea that beauty is of utmost importance?

We in the first group truly believe thinness is not the problem. The problem is the incredible power the ideal of female thinness has over us. It drives unbelievable rates of disordered eating, anxiety and depression; billions of dollars spent every year on weight loss aids that only work for 1% of buyers; and troves of online thinspo and pro-ana images curated by millions of girls and women seeking value, happiness and desirability where our culture told them they could find it — thinness. When “skinny” doesn’t drive as many profits as it does now, other ideals will rise to the top. Destroying one set of beauty ideals will *not* solve this problem, because beauty will still remain the end-all be-all.
The second group is fighting to fit broader ideas of beauty and empowerment within the prison walls of objectification.

The first group is breaking free from that prison.

None of us deserve to live within those walls.

Instead of fighting for more women’s bodies to be viewed as valuable, let’s fight for women to be valued as more than bodies to view. 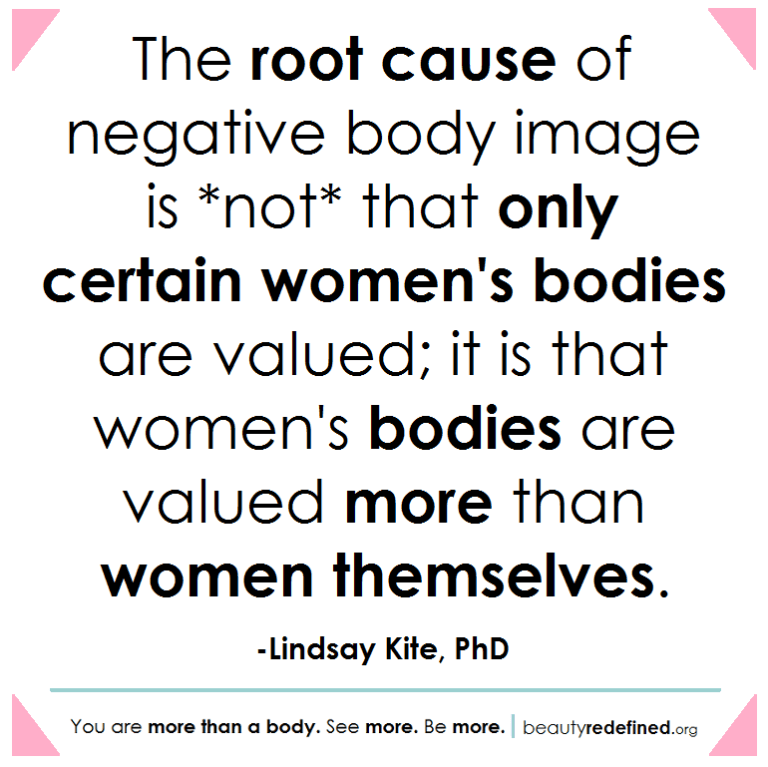 Lindsay  Kite, PhD, is co-director of the Beauty Redefined foundation, a n nonprofit promoting positive body image through redefining the meaning and value of beauty in women’s lives. With her twin sister, Lexie Kite, PhD, she travels the US speaking at universities, high schools, and conferences about how to identify objectifying ideals and overcome them to get to a more powerful, healthy place. They also host an online course to promote body image resilience in girls and women ages 14+. Learn more about it here.

Addendum: This is a response we gave to a discussion on our Instagram that might be helpful.

We want to be clear that we never said women in the second group are objectifying themselves. We said they’re still playing under the rules of objectification, which says,”Women’s bodies are the most valuable thing about them, but only bodies that look like THIS are acceptable.” People in the 2nd group react with, “No, MY body is acceptable too! See it? I’m not ashamed.” (Still fitting within the rules of “women are bodies first,” even if it is a step toward progress and empowerment, which it is for many people). The 1st group says, “No, men aren’t mostly valued for their appearance, so women shouldn’t be either! I want people to listen to women and work with us for progress, not just *look* at us.” (Stepping outside the rules of objectification, where women are doing more than being looked at). It doesn’t require beauty, a certain size or skin color or social status to step outside the rules of objectification. We all will still be objectified by others — clothes on or off, 1st group or 2nd.

While fighting for more bodies to be seen as acceptable (which is good and important), the photos of marginalized bodies to alleviate shame in others is one step, but it doesn’t even come close to moving us out of the BODIES FIRST framework. That’s where research shows is crucial to the success of women really feeling good about themselves and overcoming the tendency to self-objectify (or remain preoccupied with their appearance throughout the day, whether they *like* their looks or not). It’s self-objectification that is hurting most women from the inside, stunting our progress. The 2 groups don’t need to be exclusive (and they’re not because we all love each other), but we need to make sure the 1st group can become a stepping stone to the 2nd, rather than the end unto itself — because once women are feeling less shame about their bodies with help from photos shared by the 1st, what then? If the only goal is to alleviate shame for marginalized bodies, then fine, but if you want those women to feel better about themSELVES, not just their looks, we have to get outside the framework of objectification (you’re not just a body, whether or not you love what it looks like). We want real empowerment for everyone.

This is our contribution to moving forward. We have so much skin in this game. We want so badly for body positivity and empowerment to be had by everyone. Because of that, we want more activists in this fight to go beyond underwear photos. That might be one step, and we’re grateful for all the attention and support others have gotten for your efforts in that step, but there is more empowerment to share that goes beyond sharing our bodies. We want to fight body shame by fighting the lie that your body is the most important thing you have to offer. We don’t ignore our bodies or stop trying to push back against profit-driven beauty ideals, but we do it knowing objectification and fixation on female bodies is the real source of body shame we want to target.

In-depth body image resilience training, backed by our own PhD research, is available through our 8-week online program. Other free research and resources can be found throughout this website, as well as our Facebook, Instagram and Twitter feeds.