The Guys’ Guide to Seeing Women, Not Objects 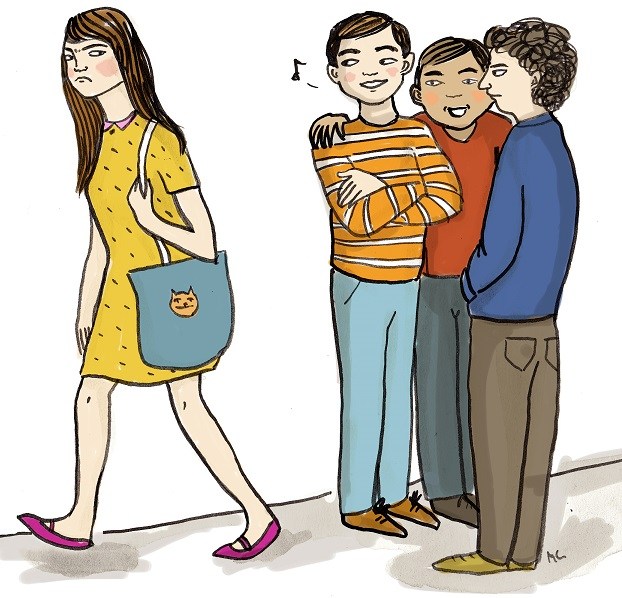 Most of our research and nonprofit efforts focus on teaching girls and women to take their power back in the face of an objectifying culture that values physical ideals above all else. This post is about the flipside of that same issue: How men and boys can take their power back. Men’s power has been taken away from them by the ever-constant idea that males are helpless, weak, and hopeless in the fight to see women as humans and not as a collection of body parts to be ogled. This is a lie. Did you see our viral Carl’s Jr. boycott? Lots of guys are sick of being sold short.

The following post comes from blogger Nate Pyle, who echoes our disdain for objectifying ideals and shares our views on the harms of viewing females as merely bodies. He blogged about his plans for a future chat with his young son about the issue.  These are his words:

Someday I am going to have to have the conversation with my son.  No, not the conversation all parents dread giving and all kids are mortified having.  I enjoy making people uncomfortable so that conversation should be fun. No, I’m talking about another conversation.  The one that happens after I catch his eye doing what male eyes do well – following an object of lust.  We will probably be out at the mall, because that’s what dads do with their sons, and I’ll catch the look.  Maybe we’ll go to the beach and see it.  Doesn’t matter where it is, there will come a time when I will see it.  And then it will be time for this conversation:

“Hey, come here.  Let me talk to you.  I saw you look at her.  I’m not judging you or shaming you.  I know why you did.  I get it.  But we have to talk about it because how you look at a woman matters.

A lot of people will try and tell you that a woman should watch how she dresses so she doesn’t tempt you to look at her wrongly.  Here is what I will tell you.  It is a woman’s responsibility to dress herself in the morning.  It is your responsibility to look at her like a human being regardless of what she is wearing.  You will feel the temptation to blame her for your wandering eyes because of what she is wearing – or not wearing.  But don’t.  Don’t play the victim.  You are not a helpless victim when it comes to your eyes.  You have full control over them.  Exercise that control.  Train them to look her in the eyes.  Discipline yourself to see her, not her clothes or her body.  The moment you play the victim you fall into the lie that you are simply an embodied reaction to external stimuli unable to determine right from wrong, human from flesh.

Look right at me.  That is a ridiculous lie.

You are more than that.  And the woman you are looking at is more than her clothes.  She is more than her body.  There is a lot of talk about how men objectify women, and largely, it is true.  Humans objectify the things they love in effort to control them.  If you truly love a person, do not reduce them to an object.  The moment you objectify another human – woman or man, you give up your humanity.

There are two views regarding a woman’s dress code that you will be pressured to buy into.  One view will say that women need to dress to get the attention of men.  The other view will say women need to dress to protect men from themselves.  Son, you are better than both of these.  A woman, or any human being, should not have to dress to get your attention.  You should give them the full attention they deserve simply because they are a fellow human being.  On the other side, a woman should not have to feel like she needs to protect you from you.  You need to be in control of you.

A woman’s body is beautiful and wonderful and mysterious.  Respect it by respecting her as an individual with hopes and dreams and experiences and emotions and longings.  Let her be confident.  Encourage her confidence.  But don’t do all this because she is weaker.  That’s the biggest bunch of crap out there.  Women are not weaker than men.  They are not the weaker sex.  They are the other sex.

I’m not telling you to not look at women.  Just the opposite.  I’m telling you to see women.  Really see them.  Not just with your eyes, but with your heart.  Don’t look to see something that tickles your senses, but see a human being. My hope is that changing how you see women will change how you are around them.  Don’t just be around women.  Be with women.

Because in the end, they want to be with you.  Without fear of being judged, or shamed, or condemned, or objectified, or being treated as other.  And that’s not just what women want.  That’s what people want. Ultimately, it’s what you want.”

For more information on how boys and men can help take back beauty for girls and women, click here for a massive list of strategies. Read this for a great guide on how to help everyone in your life figure out girls and women are more than just bodies and this for ideas on how to teach modesty in a more empowering way. Like us on Facebook to join in on the conversation with our awesome fans.