By Lindsay and Lexie Kite, PhD

So many people have been writing and asking us to weigh in on the Super Bowl halftime headline about whether the performances were empowering or objectifying. (You know that question is generally our forte!) But our input here is more nuanced than some might expect. In summary: Shakira’s and J-Lo’s performance wasn’t either empowering or objectifying — it was both. It had to be both, and it has always been both. It’s the nature of the game. 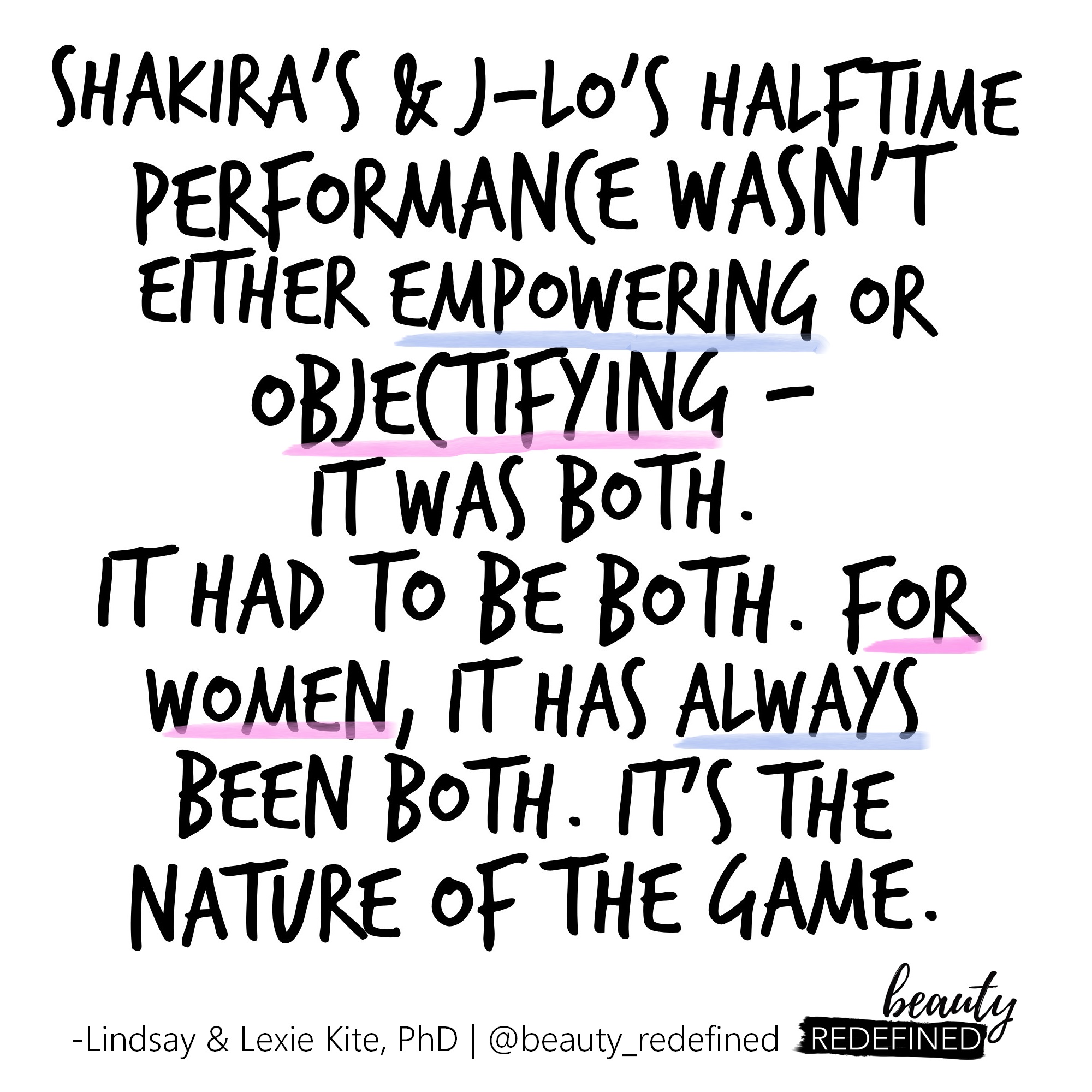 Zoom in to this weekend’s performance and you’ll see two women — Jennifer Lopez and Shakira — who are extraordinarily powerful, talented professionals in both singing and dancing who have earned their accolades and that prized opportunity through decades of hard work. They are bucking stereotypes about women “of a certain age” and what they are allowed to wear and how they are allowed to move. They are also proudly representing cultures and people who have been marginalized and underrepresented in mainstream US media. They are using their voices and platforms to shed light on social and political issues they care about and that many people were grateful to see in the spotlight.

Zoom out and you’ll see that in the past 20 years of Super Bowl halftime shows, all of the performers were chosen for their incredible talent, but *only* the women are also required to fit an extremely narrow standard of beauty and sex appeal. (With very few exceptions — full list in comments). With this expanded view, you’ll see the very different rules rules for men and women that determine who qualifies to perform at the biggest television event of the year. It’s the same rules women have to play by in all of entertainment media (and too many other areas of life), but it is especially obvious in this ultra-hyped venue.

In addition to being ultra-talented, you must follow thee three rules:

#1. Be young, very young. And if you aren’t young, you better look like you are. (J-Lo and Shakira have mastered this, and the world absolutely can not stop talking about it. Don’t get it twisted that the only reason they let a 50-year-old woman be the lead performer is because she looks like that, regardless of how talented she is.) Madonna was the oldest female performer of the last 20 years of halftime shows at age 53, while Mick Jagger was the oldest male at 70. Before this year, since 2000, the average age of the female halftime performers was 32, while the male halftime performers’ average age is 42 — a 10-YEAR AGE GAP. That’s out of 17 female performers and 27 males (only including bands’ lead singers or else these numbers would be outrageously higher for men).

#2. Be beautiful. And by that, we mean: be young, be skinny AND be curvaceous, but with no visible cellulite or stretch marks, have long, flowing hair and full eyelashes but NO other body hair, have a full face of makeup, and just be straight-up stunning. All of it. For men, go ahead and look however you happen to look. Look your age, be whatever size and shape you are, have hair or be bald, dance or mostly just stand there, wear a tophat if you want! Truly, anything goes.

#3. Be sexy. But to be clear, this is not about what truly makes *you* feel good or helps *you* experience sexual pleasure. More specifically, it’s about fitting a stereotypical, old-school male fantasy version of how sexy should appear. That’s absolutely the most important rule here for women. This requires you to wear high heels no matter how much you’re running and dancing. You also need to wear extremely body-baring clothing, which almost always means no pants of any sort. Leotards, yes. Pants, no. Men — wear whatever you want. Absolutely whatever you want, but pants are mandatory. Sex appeal can play a role if you get the urge to take your shirt off and show your tattoos or something, but that’s not why we chose you for this job and no one is expecting you to arouse the audience. To be a sexy woman, writhe around a lot, spread your legs a lot, arch your back a lot, shake your butt a lot (maybe even have a fully dressed male performer slap it), and touch your body a lot. Anything you’ve seen in media that is intended to arouse an audience — do that.

The obvious double-standards about mens’ and women’s appearances in the rulebook are so normal and unquestioned that they are invisible until you zoom out and look at the big picture. Jennifer Lopez and Shakira have had to live up to sexist, ageist, racist, nearly unreachable double standards now and throughout their entire careers in order to attract the spotlight they shared this weekend. Their unquestioned beauty and sex appeal don’t minimize or take away from their incredible talent, but they are a non-negotiable counterpart to it. We wish women could achieve this level of fame and acceptance on talent alone, but that is very rarely the case — especially for Latinas over 40.

That makes this question of “empowering vs. objectifying” a very complicated one, as it almost always is. There is no doubt that women gain power through playing by these rules — the power of fame, success, money, validation, and acceptance. For the individual women who achieve undeniable success, it is easy to see that conforming to these objectifying rules can translate into power, and even “empowerment” through self-sufficiency, social status, and opportunity. When all the superstar women we see in media fit these narrow ideals, it’s no surprise that we grow up and grow older reaching for those standards as a blueprint for our own empowerment.

The problem is, it does not work for the rest of us. Not everyone who follows the rules will attain the sought-after beauty standards, no matter how much effort they put in. Not to mention that these rules are prohibitive for so many girls and women who will never qualify to even play the game. Beauty work is endlessly expensive, time-consuming, energy-sucking, and health-compromising. The stuff that really forces faces and bodies to fit the mold is reserved for only the most wealthy and privileged among us, and even then, it isn’t a surefire fix. And for the small percentage who do actually achieve all the prescribed beauty ideals, there’s no guarantee that they will reap any of the promised rewards, whether financial, social, romantic, or otherwise.

When your empowerment is based on others’ physical appraisal of you, it can be taken away as freely as it was given. It is fleeting and fickle. He changes his mind. They find someone else. You run out of money. Genetics, health problems, injuries, pregnancies, aging, and ever-changing beauty ideals will sabotage even the most dedicated rule-followers. Lasting, sustainable empowerment is self-determined. It is based on who you are and what you know about yourself, not how you appear.

Our profit-driven culture thrives off the objectification of female bodies, and while companies, industries and even individual women might thrive, the majority of us are losing. This system fails women because it values our bodies at the expense of our humanity. Because these standards are designed to be unreachable for the vast majority of us, we are perpetually ashamed. Shame leads us to disordered eating — whether that’s starvation, bingeing, purging, compulsive overeating, or an all-consuming obsession with “healthy” eating (orthorexia). It leads us to overexercising or opting out of physical activity entirely. It breeds self-harm, addictions, and other harmful coping mechanisms. It compels us to do whatever it takes to “fix” our perceived flaws through buying endlessly promising products and services. We hide by avoiding social situations, opportunities, and any place or activity where we don’t want to be seen.

Just as we watch the women who succeed by adhering to strict standards of beauty and sex appeal, we learn to watch ourselves the same way — viewing and evaluating ourselves through the same voyeuristic perspective. We learn to monitor our bodies constantly, consciously and unconsciously working to adjust our appearances to be most appealing to onlookers. (It’s called self-objectification, and it halts our progress in every way imaginable).

Objectification is complicated. It diminishes our empowerment by distracting us, draining us, and destroying our self-worth due to a fixation on how others perceive us. It always has and it always will.

Still, there is no denying that playing by the rules of objectification can have its rewards and open up doors that are closed to those who won’t or can’t play.

So, yes. Shakira’s and J-Lo’s halftime performance was both empowering and objectifying. It had to be both. For women, it has always been both. It’s the nature of the game. 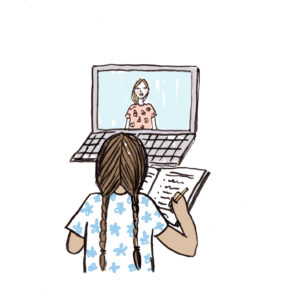 If you want more guidance on this stuff, we worked for years to develop and test our online Body Image Resilience course that is available to individuals 14+. Through an in-depth 8-week video course (that also includes full text, graphics and audio), participants can learn how to 1) recognize harmful messages in media and culture about female bodies; 2) reflect on the ways those ideals have impacted your life; 3) redefine the ways you think about beauty, health and individual worth; and 4) develop resilience through your own path that utilizes four sources of power.