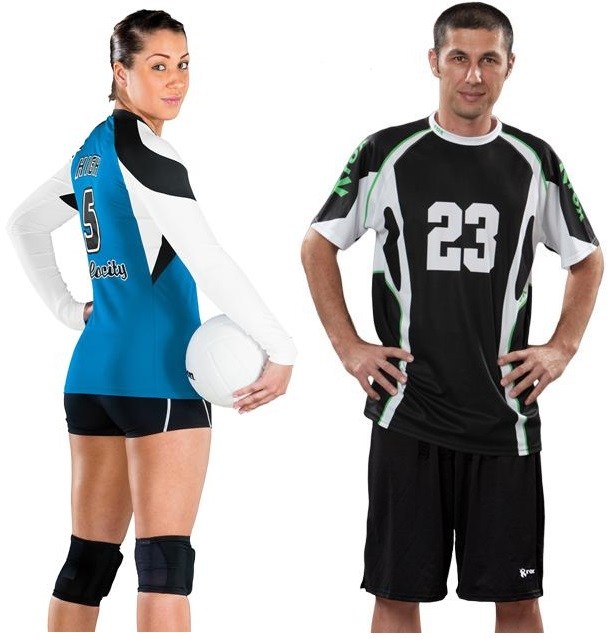 Now ask yourself why the guys are drowning in all that extra fabric!?

We’re concerned about the men here. All that extra shorts baggage has got to be keeping them from playing at peak performance levels! If they were wearing spandex with a 1″ inseam, they’d be able to bend and stretch in much more liberating ways. Who is the athletic shorts lobby that is enforcing such oppressive ideals on these male athletes?

But seriously. In a world where dress codes are strictly enforced against girls at school and leggings are hotly debated for their modesty or lack thereof, every volleyball-playing school and organization in the country sets some clear rules to distinguish female volleyball players from the male ones: Guys, you get shorts. Girls, no shorts for you. We want you to question that.

This post is about volleyball uniforms. But it’s really about so much more than volleyball uniforms. The arbitrary difference between male and female volleyball attire is just one of many gendered issues that look very normal in our everyday lives to the point of being unquestioned. Just think about all the products women are pummeled with every day that men are never (or *very* rarely) asked to buy just to look “normal” or “feel confident.” Pore-minimizing creams; anti-aging solutions; breast, butt, and lip implants; lash-lengthening potions; all-over hair removal procedures; stretch mark and cellulite creams; scar minimizing solutions; etc. Think about all the men you get to see on TV, movies and in the music industry that don’t fit any sort of beauty ideals, but are valuable and loved and in starring roles anyway, while women are too often relegated to decorating the background. Think about local and national broadcast news, where men get to sport their grey hair and wrinkles while women get fired for aging. Consider how few girls and women are featured in G-rated kids movies, where male characters outnumber females 3:1 (in group scenes it’s 5:1!), female characters wear the same amount of sexually revealing clothing as those in R-rated movies (thanks to the Geena Davis Institute on Gender and Media for this info).

Men’s and women’s basketball players have fairly similar uniforms, as do athletes in softball/baseball, soccer, lacrosse, rugby, etc. In tennis, women have to wear skirts, which is an odd distinction. In gymnastics, dance, and cheer, we definitely see female athletes required to wear much less clothing than males in the same sports. The argument that gets the most play for this seems to be, “Women need to have a lot of give in their uniforms for doing high kicks and splits.” But it doesn’t change the fact that there are lots of things to wear to do kicks and splits and guys would never be required to wear that to do the same job. Athletes in all levels of karate, MMA, and kickboxing  do a lot of kicking, and they get pants! But never is the disparity greater between what we expect boys/men to wear versus what we expect girls/women to wear than on volleyball teams. And don’t even get us started on beach volleyball. Really, don’t. It’s too much.

There’s nothing wrong with enjoying or feeling great in the standard volleyball uniform worn by female athletes today. Nowhere in this post or anything else we’ve ever said or written will you find us shaming or judging the people who agree to wear or love to wear those uniforms (or anything else, to be honest). Our problem with the uniforms comes with 1) the striking disparity between male/female uniforms, which reflects the objectifying idea that women’s bodies are primarily ornaments to be looked at; and 2) the hindering effect that unnecessarily body-baring clothing has on body image and athletic performance (i.e., self-objectification).

Here’s the thing: Beginning at puberty, girls are TWICE as likely to experience depression as boys. This is directly associated with our objectifying culture, which leads girls and women to evaluate and control their bodies in terms of their sexual desirability more than anything else. Girls and women are picturing what they look like to others while they are living instead of just living. Serious mental capacity is lost in the process of focusing on your appearance when you should be focusing on anything else. But one bright spark in this dim world of body fixation is participation in sports! Participating in competitive sports is an excellent way for girls and women to resist the soul-sucking self-consciousness that they are often plagued with. However, the awesome body image benefits are limited to non-aesthetically-focused activites (like competitive team sports, rather than activities that rely in any way on how you look while participating). For us, volleyball is straddling the line between what constitutes a sport that supports positive body image and one that can hurt it for some.

We highly and regularly recommend getting involved in physical activities to beat body shame and experience your body as an instrument instead of an ornament. We sing the praises of basketball, soccer, softball, swimming, rugby, track, etc., but don’t feel like we can offer up volleyball as a similarly great option. This is not because volleyball is in any way aesthetically focused, but because the body-baring outfits can be such a problem for girls and women who are already predisposed to being fixated on their appearances. Our cultural beauty ideals for female thighs and behinds are brutal and achievable for so few, which leaves most girls and women feeling self-conscious of some aspect — tan but not too dark, no dimples, cellulite, stretch marks, smooth skin, shapely but not TOO shapely, and the list goes on. If you are prone to feeling shame and preoccupation with your body — especially your legs and behind — those spandex volleyball shorts with little-to-no inseam that are generally hiked up to *just* below the backside will likely prevent you from being able to take your mind off the appearance of your body to fully experience the positive effects of the sport. Interesting research backs this up:

We wonder if a less body-baring uniform would promote a higher level of performance among female athletes, especially considering the high percentage who likely struggle with body anxiety on or off the court.

We wonder if a less body-baring uniform would put female and male athletes on a more equal playing field (or court), because the same sport shouldn’t require significantly different uniforms.

We wonder if a less body-baring uniform standard could encourage more girls and women to play volleyball, considering many might count themselves out specifically because of the uniform.

Are you involved in any way with a volleyball club or team, whether in administration, coaching, playing, parenting or cheering? If so, we encourage you to consider our questions above and pose them to others with influence*. Consider why there is such a disparity between the men’s and women’s uniforms and if that disparity is necessary. Consider if it might be limiting the athleticism of the players, and if minimizing the disparity between the male and female uniforms is a possibility. What would happen if just one club or team of any age group or ranking were to push back against the uniform standard by wearing modified attire, whether or not it conflicted with rules set by the sport’s governing body? Whether they believed their performance might be hindered by self-objectification that is exacerbated by the standard uniforms, or they wanted to open the sport up to others who might be uncomfortable with the short shorts, what if they made a change? Could it be worth the risk? We think so.

When we work to think of our bodies as instruments to be used for our benefit rather than ornaments to be admired by others, we start to question the norms and habits that serve only ornamental purposes. We would love to see girls’ and women’s volleyball uniforms serving a more instrumental role and less of an ornamental one.

*Current uniforms are obviously a deeply ingrained norm in the sport, so we are happy to discuss our research with members of governing bodies who determine standards for volleyball uniforms.

Want more in-depth help to reframe  your health perceptions and improve your body image? Check out our 8-Week Body Image Resilience Program, developed and tested through our Ph.D. dissertations. See dozens of other people’s thoughts on this discussion on our Facebook page here.