Our 3 Issues with the Swimsuit Issue: Sports, Sexualization and Side-Effects

Since the debut of the Sports Illustrated Swimsuit Issue is being celebrated on the Today Show and the Tonight Show and everywhere in between, we have to counter that excitement with a reality check about this supposed sports magazine’s serious blow to female equality, self-esteem and body image packaged as “safe” for newsstands and coffee tables everywhere.

Here are our 3 biggest issues with the “Swimsuit” Issue:

The Swimsuit Issue is Sporty, Safe, Swimwear Fun!! Right? Nah, it’s just sexual objectification, repackaged in an unlikely source. Every week, 30 million people catch up on the latest sports news in SI, the self-proclaimed “foremost authority” and “most respected voice” in sports journalism. Published since 1964, the SI’s 200-plus pages of nude to semi-nude women is truly a cultural event, generating global mainstream media coverage, TV shows and memorabilia to push SI’s sales through the roof every spring. Since its birth, the Swimsuit Issue has earned more than $1 billion for SI’s parent company, Time Warner, which owns CNN, AOL, HBO, the CW, Time Inc., DC Comics and hundreds of others. Talk about a media powerholder! – and thus, the constant mainstream media plugs from shows and companies that probably wouldn’t normally celebrate voyeuristic magazines. 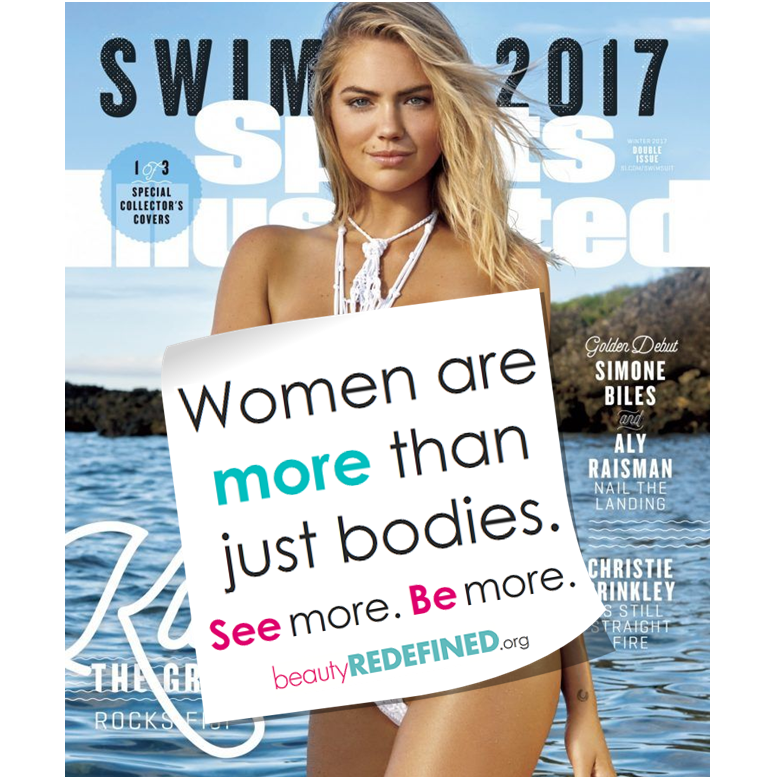 The source of this particular brand of objectification is crucial to our issue with SI, since SI is branded as a sports publication, which is openly displayed on newsstands everywhere, and is packaged as innocent and safe for all viewers. Magazines like Playboy, Hustler and Penthouse, on the other hand, are an obvious source for voyeurism, or the act of secretive looking at things of a sexual nature without being seen, and those sources do so without apology. Since they’re not selling their objectification (with only slightly more nudity) as sporty, safe, swimwear fun!!, they also required to be covered in opaque paper for mailing and can’t be displayed publicly like any other magazine deemed appropriate for all-ages public viewing, like, say, SI. The Swimsuit Issue is equally voyeuristic in nature, but does so under the guise of being “America’s foremost sports authority” and “most popular sports journalism magazine.” Duncan* put it best in 1993 when she said, “If they so desire, readers can sneak looks at the models while steadfastly denying that they buy and read the issue for pornographic content,” and she had no idea what SI would look like 20 years later, with the help of digital manipulation, surgical enhancements and reductions, and a global company owner with the power to publish and produce nearly any message and distribute it immediately.

The source of this blatant objectification also provides one extra slap in the face to female equality just in the fact that it is the #1 sports magazine, but very very very rarely features female athletes. Women appear on less than 5% of SI’s covers and the editorial content is similar. There’s no lack of female athletes to cover — those just aren’t the women SI values and they certainly aren’t doing the things SI values women for.

There’s no way around this one. SI is unapologetic in its increasingly explicit sexualization of women. Anyone who thinks this magazine is featuring models to display swimwear, or the models’ accomplishments (physical or otherwise), or anything other than just sexual stimulation for audiences is kidding themselves. Those models aren’t posed or displayed to look merely beautiful, or strong, or to show off their swimwear – they are posed and displayed to provide visual gratification to viewers. Let me be blunt here. The Sports Illustrated Swimsuit Issue is the epitome of female objectification. It is only getting more extreme. In the ‘60s, ‘70s and ‘80s, the swimsuit models posed in what we’d now call mildly seductive positions. Posed with flirtatious smiles and hands on hips to emphasize the curve of their waists, these women were acting to accentuate their best features – the objects of men’s desire. But as years passed, the models seem to more fully act like they were turning themselves into objects. By 1988, the cover model, Elle Macpherson, is staring intently into the camera while pulling her swimsuit down to expose her cleavage. Because her goal is to attract and satisfy the male gaze, she is acting with herself as a male would act if he were present – a clear display of the mental act of self-objectification (more on that in #3). 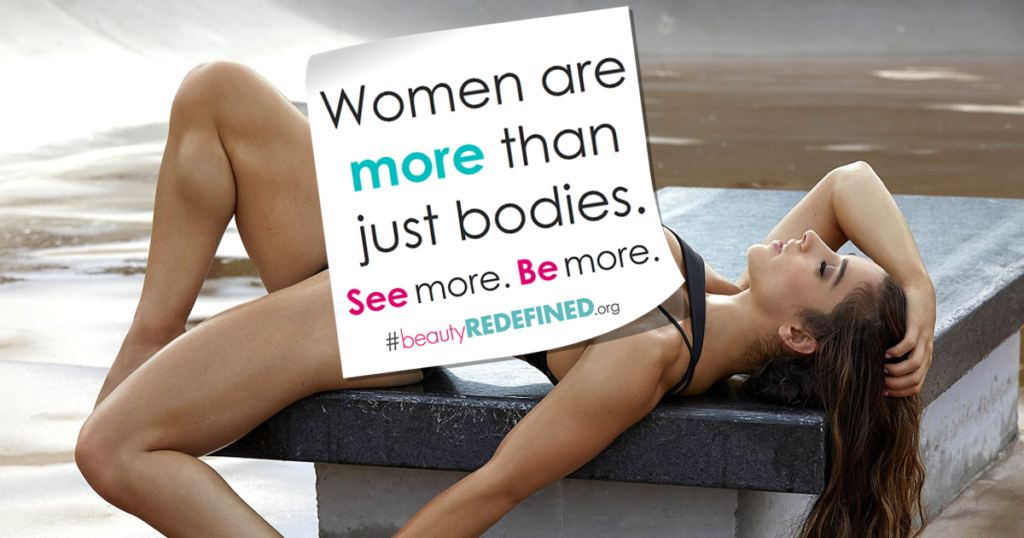 SI masks its pornographic presence by placing the models in foreign locations with sandy beaches and tropical jungles so as to appear to promote travel destinations and the appreciation of nature – but don’t forget their appreciation of nearly non-existent swimwear. The 2008 issue marked the beginning of a more naked era for SI, titled “Barely Bikinis,” is an understatement: the majority of the models appear naked, missing either the top or bottom of their bikini or are wearing completely translucent coverings with visible nipples. The latest issues feature topless models with string bikini bottoms only big enough to cover the necessary amount of skin to avoid censorship, and no cover model has worn both the top and bottom of her bikini in several years. When they do wear bathing suits, the most private of parts that are normally censored in mainstream media are repeatedly exposed in an “oops, I didn’t know that was showing” sort of fashion. These are not swimsuits on display, or even just bodies on display – the vast majority of the poses are reflective of exactly what is depicted in straight-up porn.  The 2015 cover is such an egregious example of a stereotypical pornographic pose meant to invite viewers to a sexualized view of her genitals more than anything else.

Though the swimsuit issue only shows up once a year, it fits into a much bigger picture of women being consistently displayed as sexualized ornaments to be looked at while men are featured and validated for so much more – like being featured for their athletic prowess in a sports mag rather than their oiled-up, mostly naked bodies! How novel. Objectification of women is inescapable in media from every genre for every audience, from G-rated children’s programming to network TV commercials to mall storefront windows to blockbuster movies. The SI Swimsuit Issue joins countless others in constructing men as active, women as passive; men as subjects, women as objects; men as actors, women as receivers; men as the lookers and women as the looked-at; and men as consumers and women as the objects to be consumed.

Our culture, which focuses so intensely on female appearance over anything else, teaches little girls and grown women to see themselves through an internalized objectifying perspective called self-objectification, which turns them into both the spectators and the spectacles. They literally picture themselves being looked at while going about their lives, unconscious that they are devoting part of their mental capacity to constant appearance monitoring. When women are feeling self-conscious of their bodies, or self-objectifying, they perform worse on all types of tests – they can’t run as far or as fast, lift as heavy of weights, or do as well on math, reading and spatial skills tests as they can when they aren’t worrying about what they look like. This is a huge barrier to female progress and success, and it can only be stopped once we recognize that it is happening. For most girls and women, it is unquestioned and normal. We have to denormalize this internalized objectification. 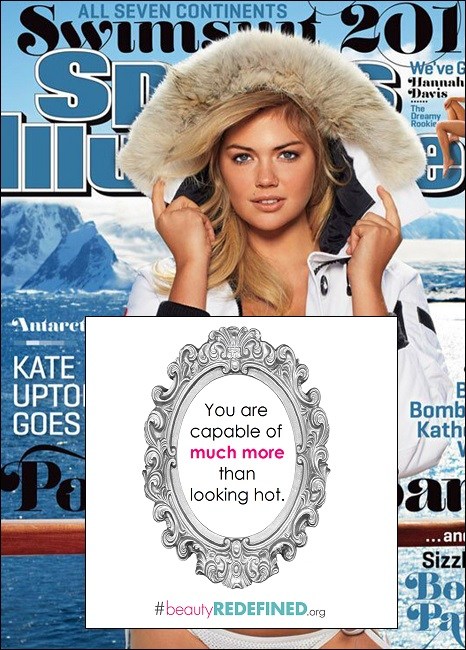 The side effects of objectifying media like the Swimsuit Issue, whether unintended or designed for profit, are changing the way we view ourselves and women in general — and not in positive ways. As spectators of themselves, women learn from popular media, in this case the wildly popular Swimsuit Issue, to compare their appearances with the media’s feminine ideal – young, tan, very thin**, clear skin, white but not too white, tan but not too dark, curves in all the “right” places, and the list grows every day. We see the exact same look, and the same body type, over and over again. This isn’t a celebration of female beauty or fitness, this is a celebration of one ultra-narrowly defined idea of female beauty or fitness that drives many girls and women to unhealthy extremes to emulate. This belief forms the foundation for a lifetime of work for women trying to live up to these constructed ideals of beauty and value. The amount of money, time and energy women devote to chasing these often unreachable ideals throughout their lives is unbelievable. These same ideals about what is most valuable in women also leads boys and men to believe these appearance-focused qualities are essential (and attainable) in a romantic partner. What it comes down to is this: the more women’s bodies are represented as objects to be looked at, consumed and discarded, the more people view and treat women’s bodies in real life as objects to be looked at, consumed and discarded.

We are not asking you to sign a petition or anything else meant to force Sports Illustrated to change the way they represent women. That’s not how we operate.

We work from the bottom up, changing the perceptions of individuals who can spark change in their own circles of influence – not from the top down, by asking media to change. We hope people will reject the harmful messages sold by outlets like SI and let that send a financial message to the companies, but we aren’t banking on that. Instead, you can join us in pushing back against the celebration of objectification by doing a few things:

**We absolutely do not see the inclusion of one “plus-size” (6’2″, size 12) model in the 2015 issue as a victory. We see this is a slight expansion of who SI deems “objectifiable,” which still upholds dozens of beauty ideals sold through every other image, even if she embodies a size slightly larger than her objectified counterparts. Additionally, we absolutely do not see the inclusion of a plus-size model in a $455,000 paid advertisement as a victory. We are not equal opportunity objectifiers and we can’t applaud anyone who is.