If you were an evil mastermind that wanted to convince the world that girls and women were only on earth as decorative ornaments to be looked at and lusted over, what would you do? How would you convince as many people as possible – both men and women, girls and boys – that females were only valuable for their sexual appeal?

You might start by becoming a major media powerholder that owns hundreds of companies to sell your sexist, objectified messages to people at every angle — TV, magazines, the internet, billboards, etc. You’d also want to get in the business of making toys for little girls to drill these unattainable beauty ideals into their heads from the time they are born. If people hesitated to buy into your messages, you’d work hard to convince everyone you were doing it to empower girls and women. She’s just a doll! Look how many jobs she has! 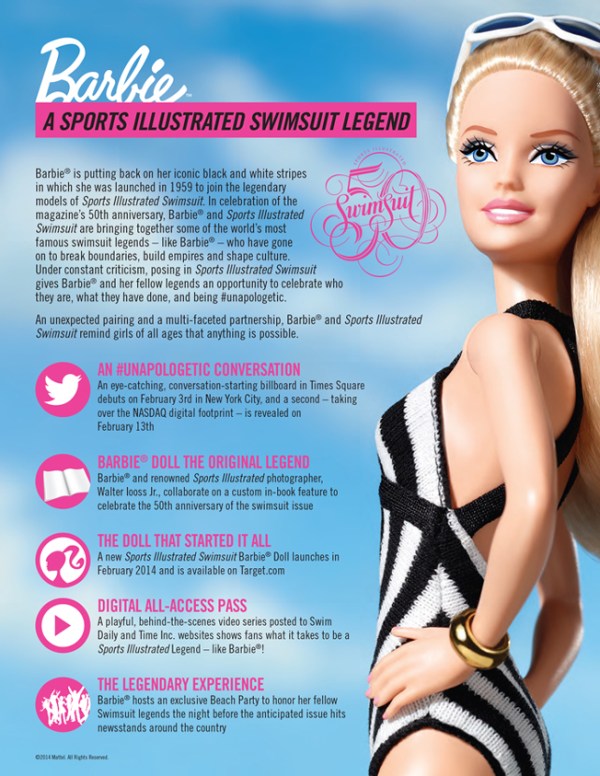 On February 18, 2014, this kind of sinister plan will come to fruition when Barbie, the iconic children’s doll, teams up with the Sports Illustrated Swimsuit Issue, where 200 pages a year are devoted to naked and near-naked women in pornographic poses, Photoshopped as usual, and embodying one very narrowly defined idea of “beauty.” This special issue of the otherwise sports-centered magazine is owned by Time Warner, which will promote the blatant objectification of women across their companies that include AOL, CNN, HBO, Cartoon  Network, Time Inc., Warner Bros., and hundreds of others. Barbie is featured in a big spread in the annual SI issue that will be seen by hundreds of millions of people, and a special “SI Swimsuit Issue” Barbie will debut the same day at Target for little girls worldwide. Barbie is even promoting the Swimsuit Issue with two massive billboards in NYC with the hashtag #unapologetic, a Barbie “beach party” and much more.

“From its earliest days, [Sports Illustrated] Swimsuit has delivered a message of empowerment, strength and beauty and we are delighted that Barbie is celebrating those core values in such a unique manner,” Swimsuit issue editor MJ Day said in a press release. Empowerment, huh? Way to sell it. Sports Illustrated is all about women’s power and abilities, right? Oh wait, they couldn’t care less about women unless they look like their swimsuit models, take their clothes (and often their swimsuits) off, and pose as suggestively as the man behind the camera directs.

“As with Barbie, every year the Swimsuit edition sparks conversations about women and body image, and Sports Illustrated stands unapologetically behind this issue that women, in reality, love,” a Mattel spokesperson told Adweek. “Unapologetic is a rally cry to embrace who you are and to never have to apologize for it.”

Barbie and Sports Illustrated are certainly unapologetic. They’re unapologetic for selling full-blown, pornographic sexual objectification under the guise of “empowerment.” They’re unapologetic for constantly defending Barbie as harmless for decades — just an iconic doll that doesn’t communicate anything about beauty or body ideals. Now they’re unapologetically blowing that argument out of the water in favor of a highly sexualized promotional platform for this toy. Just a doll? Not a chance. Mattel and SI have solidified Barbie’s role as a tool for teaching girls and women that they are sex objects, first and foremost. Barbie has officially rebranded itself (or at least admitted to what many of us recognized all along) as a vehicle for teaching sexual objectification. And they’re teaming with one of the most notoriously sexist, objectifying mediums to do it.

Mattel and SI want your daughters to know that girls and women are to be looked at above all else — and must fit certain highly unattainable beauty ideals to be worthy of positive attention in any area of life, including the most popular sports magazine. Athletic prowess certainly won’t do it, unless you’re willing to strip and pose. In a world where advertising-fueled media is inescapable, where the pornography industry has infiltrated all aspects of pop culture, and sexualized female bodies sell everything from children’s toys to deodorant, it’s easy to feel like sex appeal is all women can/should offer. So what? Why does any of this matter? Can’t you just not buy it if you don’t like it? Not quite. The truth is, this rampant sexual objectification inspires shame, anxiety, and lost potential at every turn for girls and women. 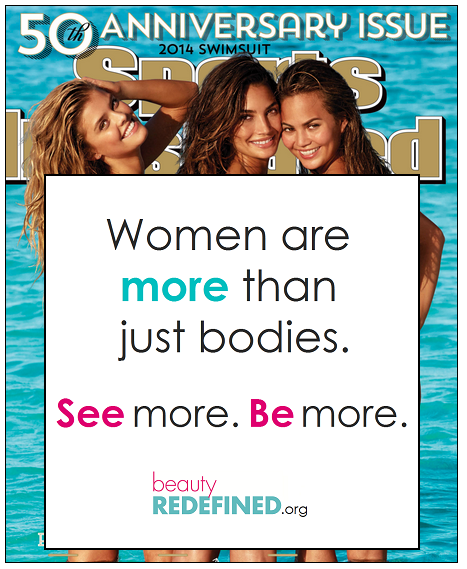 Dozens of studies show girls and women suffer in very literal ways when sexualized female bodies inundate our media landscape: adolescent girls with a more objectified view of their bodies have diminished sexual health, measured by decreased condom use and diminished sexual assertiveness, and in a particularly insidious consequence of self-objectification, research proves undue attention to physical appearance leaves fewer cognitive resources available for other mental and physical activities, including mathematics, logical reasoning, spatial skills, and athletic performance.* We know the dangerous and normalized act of female self-objectification works as a harmful tool to keep girls “in their place” as objects of sexual appeal and beauty, which seriously limits their ability to think freely and understand their value in a world so in need of their unique contributions and insight.

If any part of you feels icky about Barbie’s latest venture into the world of sex object for adult male viewing pleasure, here’s what we recommend: Don’t buy the SI Swimsuit Issue. If you want to spend your money in a more positive place, you can buy our nonprofit’s sticky notes to slap on the magazine instead. Don’t buy the SI Swimsuit Barbie doll. Don’t buy any Barbies to send Mattel the message that girls and women are capable of much more than being looked at. It’s time to shout that from the rooftops. If you feel like your body image has been negatively affected by sexually objectifying media, you can harness your power in these four areas to take back beauty and help others do the same: