Victoria’s Secret War on Women. Nothing Sexy About It.

One of the things we at Beauty Redefined hate most in this world — even more than Bratz dolls or people asking if we’ve seen the latest Dove video — is when companies try to commodify girl power or empowerment to sell sexist, objectifying baloney. One of the most successful swindlers of our time is Victoria’s Secret, whose “secret” is telling the masses their marketing “empowers women” and “helps customers to feel sexy, bold and powerful.” 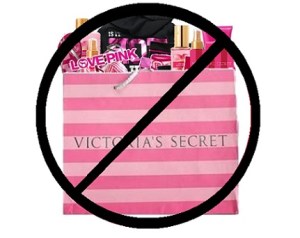 Let us say right up front: this isn’t about prudishness. So go ahead and skip those comments. This is about our in-depth understanding of objectification — depicting and viewing women as objects rather than people — which mass media does perpetually and Victoria’s Secret does egregiously. This is about the major mental and physical consequences of objectifying ourselves, or self-objectification, which is nearly inevitable for females living in a world of constant objectification of women (like VS’s marketing). Self-objectification leads us to view ourselves from an outsider’s perspective — in essence, to view ourselves and treat ourselves as objects to be looked at and consumed. This way of living holds us back from everything more important than worrying about what we look like — in other words, literally everything. Period.

Studies show girls and women can’t throw a softball as hard when they feel self-conscious of their looks. But you can say the exact same thing for math tests, spatial skills, weight lifting, and lots more.* Self-objectification is linked to poorer sexual functioning and inability to find satisfaction and pleasure in sexual experiences**, as well as decreased sexual assertiveness, including the ability to say “no” or ask about contraception. How not sexy is that? VS should really reconsider their marketing tactics of constant objectification if they truly want to help women feel “sexy, bold, and powerful.” Can you even imagine the effects this constant body surveillance has on educational decisions, career choices, political participation, mental and physical health, romantic relationships, and everything else worthwhile in life? We’d rather not, but we can’t ignore it.

So why call out VS, specifically? Because this is a company that is nearly inescapable, between its marketing, storefronts, and nationally televised “fashion” show. This is a company that rakes in $5 billion annually by selling sexually objectifying and limiting messages to all ages under the guise of empowerment. It is pushed into our lives through our mailboxes, in 100s of millions of catalogs sent to homes and offices, through our TVs and computers, with commercials at all hours of the day, a primetime CBS “fashion show” viewed by 100 million; and non-stop TV coverage of the models and the show surrounding the primetime event, from Good Morning America to David Letterman. Not to mention thousands of sky-high window displays of Photoshopped parts of women in malls near you. And to the tune of $5 billion every year, women are buying into the “empowerment” sold by Victoria’s Secret, the US’s No. 1 lingerie retailer.

This brand begs us to believe, and totally relies on us believing, that our power comes from enhancing, accessorizing, fixing, and flaunting our bodies. It relies on us believing beautiful and “sexy” look ONE very specific way — very thin, tall, young, and wrinkle- and cellulite-free — and that we must achieve those ideals by any means necessary in order to be “sexy, bold, and powerful.” If we believe we are empowered (and made desirable, happy, and healthy) by perfecting the looks of our bodies above all else, we are giving our power to an industry that profits immensely at the expense of our self-worth. What you’ll see from VS is not empowerment, but about asking girls and women to give away their power by doing one of two things in order to feel a fake and fleeting form of “power:” 1) fixing it, or 2) flaunting it. Both leave us at the harmful and stifling state of self-objectification* that hinders female progress,  health, and happiness in every possible way. 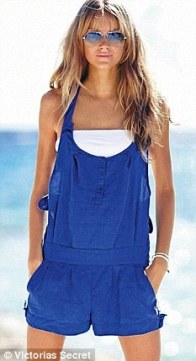 VS: Where no thigh is good enough as-is.

Watch social media FLOOD with girls and women publishing their body shame triggered by the VS Fashion Show (which airs again Dec. 9). “I am seriously on a juice fast starting NOW!” a teen will tweet. “I’d kill to look like that VS model. What is her secret?!” a woman will post on Facebook. This will happen to a startling degree. (UPDATE: this DID happen to a startling degree during the last “fashion show.” Check out Indy Ink’s awesome roundup of the tweets here). Watch the “news” stories air about the extremes to which the VS models resort to “fix” their own bodies for their near-naked stroll down the catwalk on primetime network TV. Last year, Adriana Lima shared her diet and exercise plan, which we would publish here, but it is a complete recipe for organ failure and we don’t want to promote that crap. There is nothing “empowering” about starvation.

Not even the “angels” fit these ideals. Interestingly enough, this year, it seems VS has done some PR cleanup after people were concerned about the publicly proclaimed disordered eating taking place among models, so now all you’ll hear is how much all the models eat of whatever they want and how little they exercise before (or after) the show. Plus, on top of the lengths many models must go to in creating VS’s body ideals, never forget that VS has made a name for itself as one of the most extreme Photoshoppers of all time. Model’s limbs tend to go missing quite often, and the spaces in between their thighs are widened more than any living woman could handle. (Want more Photoshop examples from others? Click here). Keep in mind that for every woman taking to social media to announce her next diet to look like the VS “angels,” there are countless others who see the inescapable VS messages and feel intense shame for the ideals they know they will never meet. They will store these images in their psyches and work relentlessly to hide themselves from scrutiny or fix their parts with products and procedures. They will internalize this objectification and spend a lifetime self-objectifying because they believe they are to be looked at above all else. Body shame, which is often triggered by self-comparisons to idealized bodies in media, leads people to hide or “fix” their bodies, and hiding can often do as much harm to  mental and physical health as “fixing.”

Among those who do not feel immense body shame triggered by these images, objectifying messages like that of VS often “inspire” them to endorse objectification and flaunt their parts as their most important attributes. Today’s VS models are sprawled across bear-skin rugs in centerfold spreads in the catalog, posed on beds wearing panties with backsides jutted in the air and fingers in their mouths, absolutely mirroring stereotypically pornographic poses.  Today, the normalized pornography of VS seeks to “empower” us by convincing us that unlike sexist media in the past that objectified women against their will, this stuff is “just for us” now and has nothing to do with men. While men are never spoken about in text or featured in the images, the willful objectification of women posing for women is presented not as a way to seek men’s approval, but as pleasing ourselves, and in doing that, we might “just happen” to win men’s (or women’s) gazing admiration. Need us to prove it?

The values Beauty Redefined stands for include control over our own bodies, freedom from the chains of self-objectification, happiness, and an understanding of our power and worth.  Victoria’s Secret represents a crazy fun-house mirror reflection of those values – a fake form of “power.”  When the desire to be desired is our No. 1 priority, we lose ourselves, our control, freedom, happiness, and worth.  In the case of Victoria’s Secret, a push-up bra and thong that says “best kisser” are made to stand for “empowerment” in a way that basically slaps us in the face.  The time to fight back is now.  Let’s take back beauty in ALL its forms, healthy sexuality (which involves much more than what we LOOK like), and happiness for every female that needs to find it.

To join the fight:

Speak up when others, in person or online, talk about VS — whether they’re Fbooking about how many meals they need to skip, or saying they wish their kids didn’t have to see the racy commercials. Any mention of VS is a great opportunity to talk about media literacy (the ability to critically deconstruct and understand media messages) and the harms of self-objectification. Talking about objectification, especially ultra-prominent forms of it like VS, is key to denormalizing it and resisting it. Post this link under their comment. Introduce them to the powerful media literacy lessons at Beauty Redefined.

Recognize and resist feelings of body shame and tendencies to self-objectify. Consciously consider the times you are focused on what you look like, rather than fully focusing on whatever task is at hand. When we acknowledge our inclinations toward hiding, fixing, or flaunting our bodies in an attempt to gain power, we have the opportunity to make more empowered decisions as thinking, feeling, humans — not objects to be looked at.

Boycott the VS brand and the VS Fashion Show if you understand how harmful their marketing is. Do not seek out the images online or watch the perpetual media coverage of it afterward. Throw out the catalogs. Unsubscribe from their mailing lists. Plenty of other companies make excellent bras, underwear, and other lingerie and don’t use in-your-face objectification to sell them. If you do boycott VS, feel free to tell them why you’re doing so via FB, Twitter, their website, etc. We doubt it will make a difference in their marketing (see: $5 billion annually), but it can’t hurt to let them know, especially publicly via social media. 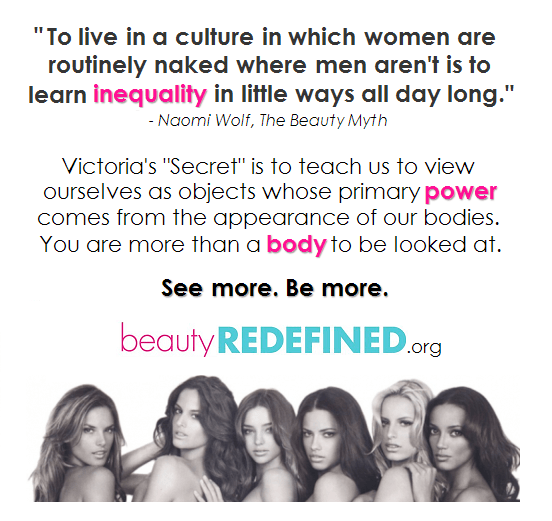