Vogue Mom Shows Us How NOT to Fight Childhood Obesity 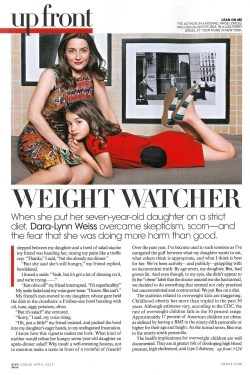 The teaser on the cover for what’s being called the “worst Vogue article of all time” is unbelievably misleading: “A Mom Fights Childhood Obesity at Home.” The truth is, if the article’s author, Dara-Lynn Weiss, mother of 7-year-old Bea, was genuinely trying to “fight obesity,” she couldn’t have done a whole lot worse. At Beauty Redefined, we’re not big on finger-pointing or parenting-shaming, but the major windfall of negative feedback this article is receiving is very much welcomed, in my opinion. But this mom isn’t alone in using misguided and dangerous strategies to “fight childhood obesity” — she was just bold enough to write down all the shameful details for Vogue and accept a book deal to tell the story even further.

Too many of us are guilty of imposing these unhealthy strategies on our children, our friends and ourselves. If any of these missteps sound familiar to you, now’s your chance to recognize it and reject it. Replace that mistake with a new strategy, a new way of thinking, a new way to redefine beauty while we redefine healthy!

You can read the full story in the current (April) issue of Vogue (not currently available online) to capture the full picture of this mother’s harmful, health-threatening actions, but I’ll summarize a couple of the problems with her approach here and follow that up with some much less shameful and more promising strategies to fight weight-related health problems.

First up on the list of reprehensible, health-harming strategies used in this much-publicized case: This mom decided to take action against her then 6-year-old daughter’s growing weight because she looked fat. When a boy at school mocked her beautiful little girl, calling her fat, Mom decided her sobbing, heartbroken daughter’s weight had to be fixed because it’s a problem “everyone can see.” Her instructions and warnings centered on the young girl’s appearance: “Bea, you have to stop eating crap like that, you’re getting too heavy.”

Second, Mom put her daughter on a restrictive diet, monitoring her food intake closely, banning participation in “Pizza Fridays” and assigning “good” and “bad” labels and reactions to certain foods. Upon finding out about the 800 calories her daughter consumed at her school’s French experience day, Mom withheld dinner as punishment.

Third, Mom alternated her daughter’s food restrictions and allowances based on her own relationship with food and her own fluctuating mood.  “When she was given access to cupcakes at a party, I alternated between saying, ‘Let’s not eat that, it’s not good for you’; ‘Okay, fine, go ahead, but just one’ and …  Then I’d secretly eat two when she wasn’t looking,” wrote Mom.

Fourth, Mom openly derided and embarrassed her daughter in public regularly. “I cringe when I recall the many times I had it out with Bea over a snack given to her by a friend’s parent or caregiver … rather than direct my irritation at the grown-up, I often derided Bea for not refusing the inappropriate snack. And there have been many awkward moments at parties, when Bea has wanted to eat, say, both cookies and cake, and I’ve engaged in a heated public discussion about why she can’t,” Mom wrote.

Why those four strategies are bad and what to do instead:

Rather than taking up a medically sound approach to promoting health in her child, Mom was only moved to intervene in her daughter’s health after her daughter was bullied and called “fat.” Her concern was solely for her daughter’s appearance, based on all given indicators. The 6-year-old was previously diagnosed as “obese” by her pediatrician, which can be used as a warning to pay close attention to proper nutrition and physical activity, but it can also be a very problematic diagnosis 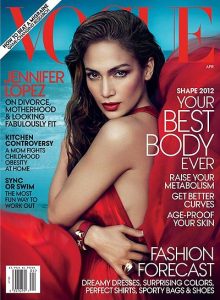 for such a young child since no reliable measures exist to determine what weight/levels of obesity coincide with increased health risk for children. More information on problems with measuring health can be found here. This confusion of health with appearance is a massive and widespread problem that much of my research is devoted to. In this profit-driven media world, health and fitness are consistently defined according to appearance-based terms, which simply isn’t accurate, to say the least. This article is featured in Vogue‘s annual “Shape” issue, right alongside a glossy portrait of cover girl Jennifer Lopez looking “fabulously fit.” We have to stop judging fitness by what bodies look like and start judging it by what they can do.

No amount of cosmetic surgery, Photoshopping, tanning or disordered eating will produce true health and fitness. By focusing on the appearance of this young girl’s body rather than her physical well-being, this young girl is set up for a lifetime of body anxiety and all the corresponding unhealthy practices that too often accompany body shame. What if Mom had instead consoled her crying, embarrassed daughter after the bullying incident and reassured her that she is beautiful, worthwhile and powerful? What if she then intervened in providing healthier food options and joining her in physical activity if there was true concern for her health? I believe the outcome – both internally and externally – would have been much more appealing.

SOLUTION: Define health in terms of how you feel and what you can do, not what you look like, how much you weigh or your BMI. Same goes for kids. Kids need helping learning to take responsibility for their health and feeling the positive repercussions of doing so. Help them see their health in terms of how they feel and what they can do, NOT what they look like. Eating healthy and getting enough exercise won’t always translate into what weight charts and the BMI deem a “healthy weight” – many people (especially children) will be under or over this threshhold despite being active, eating a well-balanced diet and being free of disease and sickness. Along with healthy levels of physical activity (which many experts agree is 60 minutes per day) as the best predictor of a person’s health, internal indicators of health like blood sugar, cholesterol and blood pressure are much better indicators of wellness than weight, body fat percentage or BMI. More information on accurate means for measuring health can be found here. We must remind people, especially young girls, that their reflection does not define their worth — or their health.

PROBLEM: Dieting in childhood is a major predictor of both obesity AND disordered eating later in life. Dieting is not recommended for children, whose bodies are developing and in a state of constant flux in weight and composition. Further, Mom’s methods for weight loss are scientifically unfounded. Depriving her daughter of dinner after she ate 800 calories at school is a recipe for weight gain, if anything. Deprivation kicks body into starvation mode, which has been shown to contribute to weight gain AND binge eating. Further, assigning positive and negative labels or emotions to different foods will serve to promote anxiety and feelings of deprivation, not healthy choices. Dr. Leslie Sim, clinical director of the Mayo Eating Disorders Program, said, “When there’s a lot of emotional response around food, that can really create an anxiety disorder and potential eating disorder.” Further, most children do not understand proper nutrition. The foremost teacher of cultural values, including nutrition and health, is mass media — and that’s not a good thing. Studies show the influence of mass media, particularly food advertising, on children is a major cause for concern: In research, most children believe “diet” and “fat-free” labeled foods are healthier than actual healthful foods. That means when given the choice of which is better for their bodies, most children choose Diet Coke over skim milk and fat-free fruit snacks over apple slices.

SOLUTION: No more categorizing food as “good” or “bad.” Try your best to separate emotions from food. Avoid deprivation and exessive restriction. Get informed about what proper, balanced nutrition entails for you and your family and pass that information along! In a media landscape that teaches inaccurate health information left and right, the responsibility falls on parents, teachers and other adult caregivers to learn proper nutrition for themselves and then teach their children and those over whom they have influence.

PROBLEM: This mom determined her choices for her daughter based on her own mood, her own negative body image and disordered relationship with food. Preoccupation with thinness and weight in the home – especially by the mother – is a strong predictor of a future eating disorder. We know this level of shame associated with a young girl’s growing, changing body is harmful because it can generate a preoccupation with thinness and weight loss through unhealthy means for the rest of her life. Body shame and fixation on thinness are precursors to disordered eating and eating disorders on both ends of the weight spectrum — by contributing to anorexia and bulimia and to binge eating disorders, sedentary lifestyles, and poor nutritional choices. If you feel awful about yourself, why would you take care of yourself?

SOLUTION: Recognize and reject your own body image problems. Choose to recognize the ways you enforce harmful ideals, body shame and preoccupation with weight on yourself and those you love. Choose to reject them by giving them up, one step at a time, and replacing them with positive thoughts, health-promoting choices, love and renewed dedication to positive body image and positive health every day. Redefine beauty and health for yourself in attainable, realistic, happy, healthy ways. For a list of strategies you can incorporate into your own life and pass on to those you love, see our Strategies for Girls and Women to Take Back Beauty. For sticky reminders or postcards you can post around your house/work/school, check out our body-positive merchandise that supports the work of Beauty Redefined.

PROBLEM: You can’t embarrass or shame anyone into making healthier choices. It’s especially harmful to publicly embarrass a young girl for her food choices. Body shame only leads to health problems, as previously mentioned, which are often in the form of eating disorders, sedentary lifestyles and poor nutritional choices. We have to encourage ourselves and our loved ones in productive, uplifting, loving ways — not through negativity, shame and embarrassment. Lexie and I do this work out of a serious feeling of love and concern for girls and women everywhere. We’re not moms yet, but we are well aware of the love our mom feels for us and the love so many moms have for their growing daughters and sons. I don’t doubt the mother who wrote this sad article loves her daughter, but I do hope she recognizes that her strategies and priorities are tremendously misguided and doing a major disservice to the daughter she surely loves.

SOLUTION: Let your own love — for yourself, your daughter, those closest to you — be the impetus for making heathy changes in your own life and supporting those around you in doing the same. Shame doesn’t do it. I guarantee you love will have a much stronger, more lasting and more powerful effect on your health than shame or embarrassment ever will.