When “You Look So Skinny!” Does More Harm Than Good

POP QUIZ: If you know a girl or woman who has lost weight but you don’t know how or why she did it, what do you do?

B: Don’t say anything in person, but next time you see her on Instagram or Facebook, throw down a little “You look so skinny!” on a couple pics to let her know you noticed.

C: Talk about anything else besides her looks. How much fun she is. The weather. Her job. Your lunch. That dog walking by. Anything else.

This might feel like a trick question because looks-based compliments are good, right? I mean, we live in a world where the vast majority of girls and women feel terribly about their bodies, so hearing nice things about their looks has to help, right? It turns out that is not always the case. Answers “A” and “B” might actually do more harm than good, and we just got an email from an awesome Beauty Redefined fan that is the perfect case study to help us teach why “C” is the best answer of them all:

“Last year, four months after giving birth, I began focusing on getting healthy, eating right, and exercising. Over the course of the next six months I lost a significant amount of weight and I felt good — better than I had in years and years — so I was happy. Here’s what I was not happy about: the fact that everyone I had ever met all of a sudden felt it was appropriate to comment on my physical appearance. Casual acquaintances felt like it was perfectly reasonable to start asking me about my weight and size. Family members would tell me how good I looked now, and I couldn’t help but feel bad for me from a year ago, who I had loved, but apparently everyone else was thinking could be a lot better. I have never felt so uncomfortable in my own skin in my life. I — a woman who has always felt infinitely more defined by my thoughts and humor than by a number on a scale — suddenly felt very self-conscious about everything. All of this new attention found me wanting to be sure to hide my flabby arms (because losing lots of weight leaves a lot of skin) and saggy boobs (because I’d been either pregnant and/or nursing for the last five years). And no matter how wrong I knew it was I couldn’t help but think to myself, ‘If people think I look good now, they’ll really think I look good if I lose 20 more pounds.’ This sudden (undeserved) praise from others has really wreaked havoc on all of my previously held ideas of positive body image and female empowerment. I have no answers.”

But we have some answers! Let’s start with why it’s so important to STOP talking about each others’ bodies – even in what we assume are nice ways – and then we’ll get to what we can do if we’re falling into a deep pit of appearance obsession that often comes from constant focus on our bodies.

First, you have learned firsthand that it is time to stop body policing. None of us have the responsibility to comment on the look of someone else’s body – not even the “nice” sounding stuff. Not in front of their faces or behind their backs. So often we turn to appearance-based conversation first as a default, and we must reconsider this automatic small talk. This is especially true for girls and women, who grow up hearing from all sides that they are things to be looked at above all else. 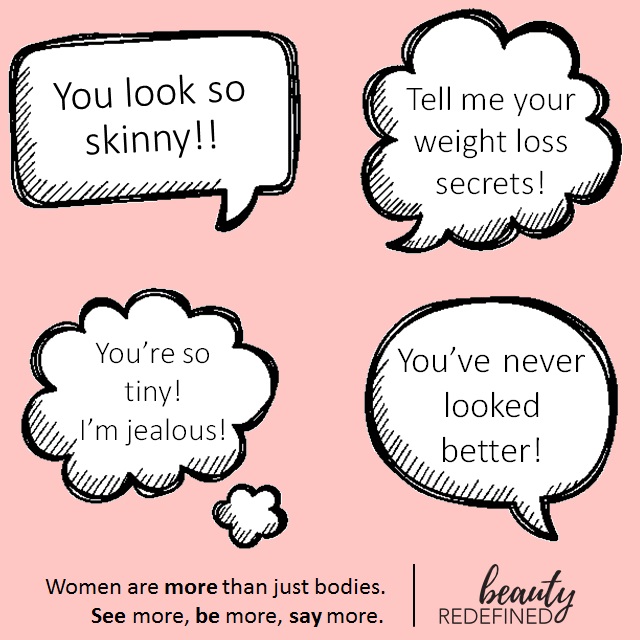 Too many females suffer the debilitating consequences of eating disorders, appearance obsession, body anxiety and depression, all in the name of trying to meet unattainable beauty ideals. Did you know hospitalizations for little girls with eating disorders is up 100 percent in the last decade? Help little girls recognize they are more than their bodies by choosing to avoid discussing the look of another woman’s body in media or real life. Did you know cosmetic surgery increased 446 percent in the last decade, with 92 percent of those voluntary procedures (mostly liposuction and breast enhancement) performed on females? Help ease the ever-more-powerful temptation for painful and expensive cosmetic surgery by never talking negatively about the look of another woman’s body in media or in real life. Did you know self-objectification is leaving even the youngest of girls and the oldest of women with fewer cognitive resources available for mental and physical activities, including mathematics, logical reasoning, spatial skills, and athletic performance?* Help stop this downward spiral of appearance obsession by changing the conversation from the look of another women’s body in media or real life to anything else.

We must make sure our dialogue reflects what we know to be true: We are not bodies to be looked at, judged, and constantly in need of fixing. We are capable of so much more than being looked at. We owe it to our sisters to shout that truth from every rooftop.

So friends, if you know someone who has lost weight and they aren’t publicly speaking about how they did it, don’t feel the need to talk about it. Don’t automatically praise them. Don’t publicly comment on their photos with “You look so skinny!” Just don’t.

Because you don’t know if they are working out and eating healthfully or depressed, sick, or suffering with an eating disorder or resorting to other unhealthy extremes to fit an unhealthy ideal. You just don’t know. And too often, those body-policing compliments of “Oh you look so AMAZING!” are exactly the motivation someone needs to continue down an unhealthy pathway of unsafe diet pills or over-exercising or disordered eating. Even just seeing those body-based comments on someone else’s pictures online over and over again can send someone else down that dangerous pathway. Other times, a disease or other illness could be causing your friend to lose weight beyond their control and “Did you lose weight?!” is the exact wrong type of compliment they want at the moment. We can do so much better than the constant body policing.

It’s time to value the women and girls in our lives for more than their looks. Dig deep next time you want to give a compliment. If you give a looks-based compliment, pair it with a character-based compliment. Say something nice about who they are, what they do, and how much you care about them outside of how they look. When we minimize other females to just their bodies, we forget to remind them of their beautiful talents, characters, and gifts. And we can unknowingly be giving them motivation to stay in unhealthy patterns so they keep “qualifying” for looks-based compliments. We are more than bodies, so let’s make sure to remind each other of that powerful truth.

But what if, like our friend’s example, you are at the receiving end of lots of looks-based compliments? What if you’ve lost weight recently and all that body policing about how “much better you look” is keeping you focused on yourself as a body to be looked at above all else? So often, those looks-based compliments just perpetuate the belief that looks are most important in your life. Once you’re riding the high of all those compliments, you have to continuously work harder to impress people in your life to give you more compliments. If they stop complimenting you, you start to feel like you just need to work a little bit harder to earn their praise. What a worthless and selfish cycle to be stuck in! You are so much more than a body to be looked at! (Sick of us telling you that yet?) Here are three surefire strategies to use the moment you feel yourself getting sucked into the worthless pit of looks-based obsession:

Next time the dialogue starts to revolve around your looks and you get uncomfortable, take the opportunity to teach a little lesson in a kind and thoughtful way: “There are lots more interesting things to talk about than my body! Did you know I recently went on vacation?” or “BORING! Let’s talk about you. How is work going?” or throw in some honest vulnerability: “Thanks, but I’m more comfortable talking about lots of other stuff besides my body. How was your weekend?” or “To be totally honest, I have made a resolution to compliment women for stuff other than their looks because I feel like we get stuck talking about shallow stuff like physical appearance way too often!” or tell them you just read an awesome blog post about changing the conversation on looks-based compliments and you’ve vowed to do it (then send them this link, of course!) 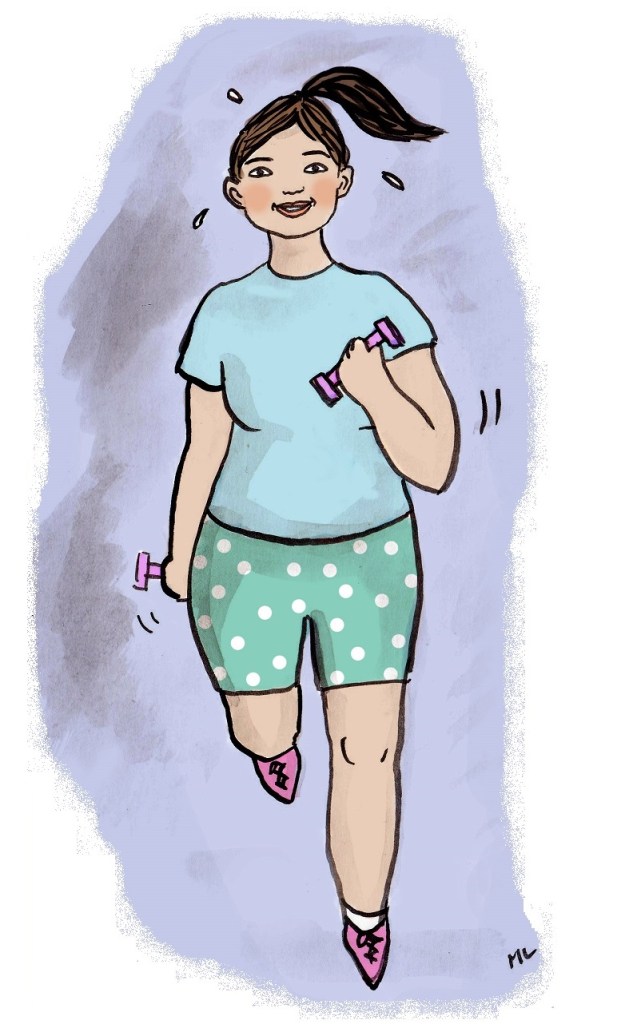 Regardless of what you look like, or what you think you look like, you can feel good about yourself, because you are not your appearance. Your weight, size, and measurements are just numbers. Positive body image is the cornerstone of our work, and it is founded in the life-changing understanding that your body is an instrument to be used and not just an object to be adorned. Prove it to yourself by setting a fitness goal that will absolutely reinforce the truth that your body is powerful and capable and you are not just a decoration for the world to look at. Run a certain distance. Swim 10 laps faster than ever. Do a certain number of crunches, push-ups, pull-ups – any fitness achievement measured in actions. You will get the reward of endorphins released into your body to boost your mood, the empowerment of accomplishing a goal, and the satisfaction of proving you are more than a pretty face. It’ll snap you out of your self-objectifying rut in no time.

Throw away your scale.

Tracy Moore at Jezebel put this so well: “Ask yourself, ‘What exactly is going to happen when I reach magical X pounds?’ Force yourself to imagine the perfect life you think the perfect weight will bring you. What does it look like? You never argue with your husband? That guy you like at work will ask you out? The beauty of working toward real confidence by actually liking yourself is that it doesn’t disappear the moment you gain weight, it is always there, and anyone worthwhile is drawn to you because of that aura, not the fact that you’re at some specific number… Plus, numbers are misleading. There is no magic number for anyone. Paying attention to some perfect goal weight, at which point you imagine yourself to no longer have problems or somehow transcend the issues you faced with 20 more pounds is a complete and utter illusion. And a waste of time. And probably really about something else.

Our fans on Facebook also weighed in with their own experiences of hearing “You’re so skinny!” and it being exactly the wrong thing they needed to hear:

If these comments aren’t enough to convince you that body-based comments aren’t helpful, we don’t know what is! Being conscious of our compliments is an important way to SEE MORE in ourselves and other women in our lives, so we all can BE MORE than women fixated on our bodies.

Need more help developing body image resilience that can help you overcome your self-consciousness and be more powerful than ever before? Learn how to recognize harmful ideals, redefine beauty and health, and resist what holds you back from happiness, health, and real empowerment with the Beauty Redefined Body Image Program for girls and women 14+. It is an online, anonymous therapeutic tool that can change your life.