Starving and Stifled: Women are Counting Calories Instead of Changing the World

By Vanessa Garcia (Originally published Sept. 5, 2014 in the Washington Post)

I was lying in bed in my New York City apartment when the world went black. My breathing had gotten sluggish, and my heart felt like it was slowing down. I didn’t feel pressure in my chest, and I didn’t feel pain, just an overwhelming sense of tiredness and fatigue. A complete depletion of energy and the absolute inability to move. And then: black. 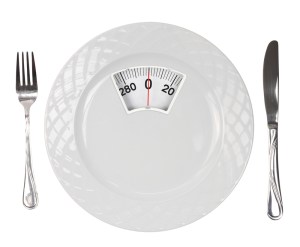 I hadn’t eaten anything but gum and coffee for three days. Even before that, I’d been eating very little for weeks, months, even years. I was 24 years old and a full-fledged anorexic-bulimic.

It was 2003, and I was trying to launch my career as a writer. I had dreamed of publishing my first novel by then. Instead, between the ages of 15 and 29, I suffered from numerous bouts of anorexia and bulimia. I wasted my most promising years and what little energy I had obsessing over my weight.

My problem reached the extreme, but these kinds of unhealthy relationships with food are hardly uncommon for women. At every turn we see them: a woman counting calories, a woman dieting despite her normal weight, a woman cutting carbs or pretending she’s allergic to gluten so she doesn’t have to eat that slice of pizza at the office party. I have friends who spend three hours at the gym and run marathons on a diet of bananas. This isn’t an exaggeration. According to the National Association of Anorexia Nervosa and Associated Disorders, 25 percent of college-aged women binge and purge as a form of weight-control.

College-educated women are leaning closer to the toilet bowl than to Sheryl Sandberg’s boardroom table. In the past several years, women have been speaking louder about gender discrepancies in the workplace, unfair pay and the paradoxes that arise out of trying to “have it all.” On the surface, 21st-century feminism seems to be booming. But even as writer Hanna Rosin proclaimed “The End of Men” in 2010, women were really the ones disappearing. Quite literally. According to a 2009 article in the American Journal of Psychiatry, eating disorders have the highest mortality rate of any mental disorder.

Women are starving themselves. They’re spending more time thinking about their calorie intake than how to change the world. It’s not just the severe disorders that we have to be wary of. In a 2008 survey by SELF magazine and the University of North Carolina at Chapel Hill, 75 percent of women reported disordered eating patterns, 37 percent regularly skipped meals to lose weight, and 26 percent cut out entire food groups. The report concluded that “eating habits that women think are normal — such as banishing carbohydrates, skipping meals and in some cases extreme dieting — may actually be symptoms of disordered eating.”

The drivers of this illness are all around us. Models weigh as much as 30 percent less than their recommended weight and plus-size models are often as small as a size 6. The press tells us that Victoria Beckham lost her “baby weight” with the Five Hands Diet, which means she ate five fistfuls of food a day. And there are actresses such as Elizabeth Hurley, who notoriously told Allure magazine that she’s always “thought Marilyn Monroe looked fabulous, but I’d kill myself if I was that fat.” Monroe was about 5 feet 5 inches tall and fluctuated between 118 and 140 pounds.

Even now, when songs like “All About That Bass” by Meghan Trainor hit the pop charts, I have to wonder if they are the solution or the problem. The song, touted as a healthy-sized woman’s anthem, is actually pretty demeaning considering that the only reason Trainor gives for being happy with her curves is that guys like them: “Yeah, my mama she told me don’t worry about your size/She says boys like a little more booty to hold at night.”

Women have to take their bodies back. We can’t close gender gaps when we spend endless hours counting calories instead of cracking glass ceilings. We can’t gain self-assurance when body dysmorphia is so abundant. It takes a whole lot of strength, fuel and energy to push all of inequity’s baggage off of us.

I know exactly the kind of life that weight obsession leads to. I was shaken out of my blackout by an enormous push on my back, a big jolt and something — perhaps my inner voice – whispering, “You have too much left to do.” I realized that I was alone and that I could very likely die that way. I could waste away, along with my brain, my thoughts and everything I could possibly become. I put on my coat, went outside and bought a wrap. I tried to ingest it. It was painful, both physically and emotionally, but I wanted to live. This was the beginning of my recovery. Back then, I was 5 feet 5 inches tall and 100 pounds with a winter coat, sweaters, long underwear and boots on. (I only weighed myself fully dressed in winter, so if I weighed too much, I could blame it on the extra clothes.) It took five years from that moment — two of those in weekly therapy — for me to truly gain normalcy in my eating patterns.

All I can think now is: What a waste of life. I think about the missed opportunities and the unmet goals I sacrificed because of the time and energy I wasted on cutting my weight. If I could talk to my 25-year-old self, I’d tell her,

“Your time is precious. Get help. Do it now. You have too many important things to do.”

Vanessa Garcia is a writer, playwright, and journalist. She is a doctoral candidate at the University of California Irvine.

Amen, Vanessa. When girls and women are constantly fixated on calories, carbs, weight, shape and appearance, they are stunted in every other thought process or pursuit. Our health, happiness, relationships, education and contributions to the world are damaged and stifled when we are dedicating a steady, invisible stream of mental and physical energy to monitoring and controlling our appearances. It doesn’t have to be this way. We can take our power back by recognizing the forces that push us to fixate on our bodies and recognizing the amount of time and energy we often unwittingly devote to these distractions. Once we recognize how unnatural and stifling it is to prioritize the look of our bodies above all else, we can reject those messages, beliefs, and actions that keep us in those chains. We can fulfill the potential each of us have to contribute good to a world that needs our unique awesomeness.

You can use your pain — your dark, unhappy, hurtful thoughts and experiences relating to your body — as a platform to grow stronger. You can see more about yourself and the world, and be more than you could be without that pain. Not in spite of those hard experiences, but because of those hard experiences. This process is called Body Image Resilience, and it is within anyone’s reach who is willing to face body image problems head-on rather than coping with them through harmful means like disordered eating, cutting, abusing alcohol, or any other means of attempting to hide or fix our bodies.