When Curvy Appreciation Turns to Objectification

We don’t ever get too pumped about the latest viral body positivity stories, because we’ve found that if it’s quickly embraced by the masses, it probably doesn’t challenge the status quo in any substantial way. The story about the man gaining worldwide acclaim for loving his “curvy wife” is just the latest example. The status quo thrives on seeing women’s bodies — evaluating them, appraising them, comparing them, and ogling them. In other words, objectifying them, or reducing them to parts for consumption. But here’s the deal: Objectification is still objectification even if the bodies being objectified look different from the popular ideals. 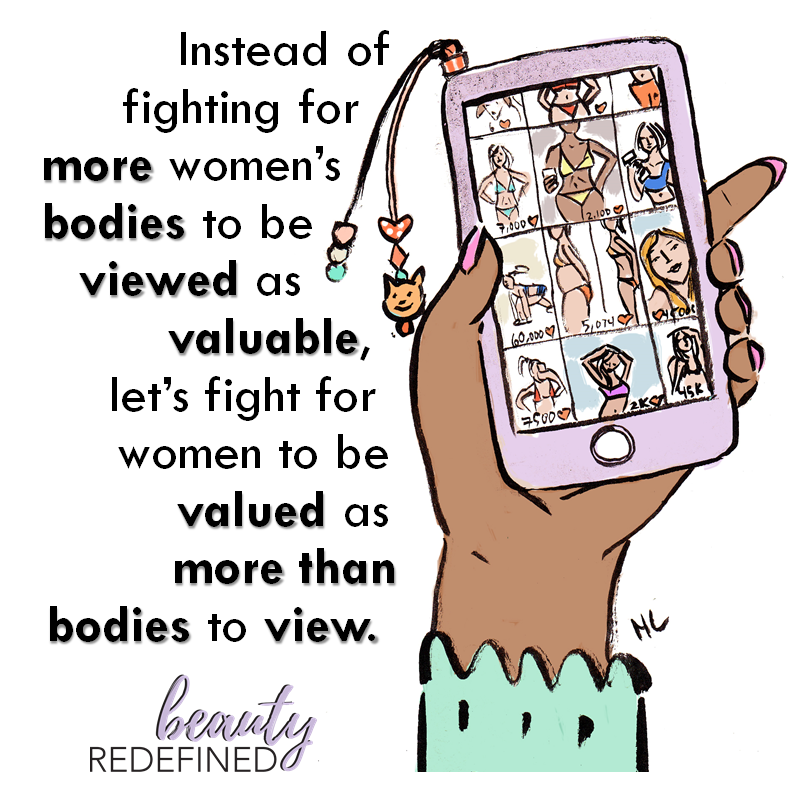 For a man publicly fawning over particular female body types and parts, where’s the magic line that determines when his fawning turns from standard objectification to progressive, enlightened body positivity? Is it if that woman is over a certain weight? Maybe if she’s larger than a size 8? Maybe if he lists and describes her otherwise culturally sub-standard parts in a super enlightened, positive way — “sexy cellulite” or “sassy saddlebags?” You know, heroically maintaining attraction despite these atypical characteristics most men would run from? Even if other lesser men mock him?

This question applies to women too. For women who are publicly posting their body-centric photos online as a sign of “embracing” their supposedly flawed bodies, where is the magic line that determines when a post turns from emulating standard objectifying images that *hurt* women, to progressive body positivity that *helps* women? Does it suddenly become feminist and progressive for women to post pictures of their bodies if they’re over a certain weight or size? Or if she’s hunched over to create the teensiest belly roll? Or if she has no makeup on (just lash extensions and concealer and lip gloss)?

Sure, the *intention* behind a body positivity post is very different than the intention behind a standard objectifying image of an unclothed female body meant to be consumed by others (particularly men). But if you take away the inspirational caption, the final product is largely the same: female bodies being revealed, shared, compared, evaluated, and ogled. Not just by women looking for bopo inspo, but by *anyone.* You know those awful men who hate women but love women’s body parts? Yes, they love bopo inspo too! It’s all just more bodies. Bodies. Bodies. Bodies.

If we agree women should be valued as *more* than bodies, then we can’t cheer for objectification — whether it comes in the form of well-intentioned women posting their bodies online, “flaws and all,” or Sports Illustrated featuring plus size bikini models on all fours in the sand. Objectification is still objectification even if the bodies being objectified look different from the popular ideals. 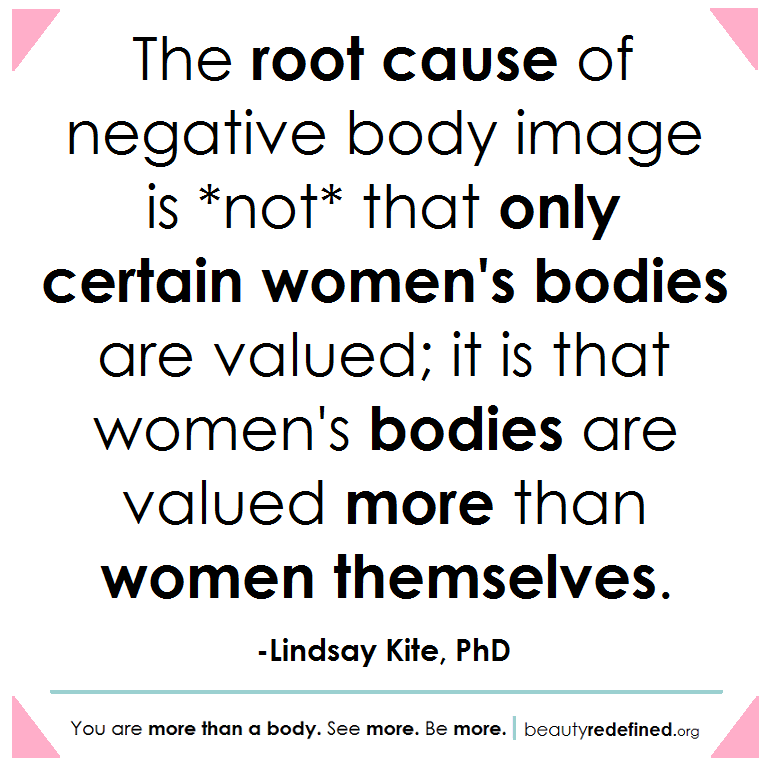 Ultra popular media messages aiming to alleviate women’s body shame — like the viral “hero husband attracted to curvy wife” example — often  reinforce the problem by keeping the focus on women’s appearances. Defining and describing and appraising women for their bodies — even in the name of celebrating them — is reducing women to objects. Objects are less than human. Objects exist for people’s use. Objects are only as valuable as an appraiser believes they are.

Objectification is at the root of women’s inequality, oppression, low self-worth and fixation on appearance. This is true whether individual women choose to participate in and be rewarded for that objectification or not. Because women are primarily valued for our parts and sexual appeal at the expense of anything else, we are bought and sold to men, silenced, abused, mutilated, murdered, devalued, not believed, and compelled to keep our bodies at the forefront of our thoughts for life. As long as women are sexual objects first and all of the rest of our humanity is secondary, we will never be on equal footing with men.

Progress for all of society requires valuing women for more than our parts — not simply expanding the definition of which parts are valuable. This fight against normalized objectification requires both women and men. As women, we must first learn to *see more* in ourselves in order to *be more* than a body for others’ appraisal and consumption. We must recognize the ways we’ve learned to view and value and evaluate ourselves, and then actively resist our tendencies to self-objectify and hold ourselves back from experiencing our full humanity.

Men must learn to *see more* than bodies in women, and then learn to *be more* than someone who views women primarily as objects to be looked at and consumed. It is important to understand that publicly proclaiming your attraction to certain female body types isn’t suddenly progressive when those bodies fall outside the traditional ideals. It is still objectification. It is still reducing women to parts to be appraised and consumed, even if you’re appraising them favorably and happy to consume.

Women are more than just bodies. When we see more, we can be more.

Here you can create the content that will be used within the module.