Far too many mother-daughter relationships are suffering under the lie that we are just bodies to be looked at, judged, and fixed. This painful belief manifests itself in moms appearing to be judgmental and overly critical, and daughters feeling like they will never be good enough to meet mom’s expectations. Dig down, and you’ll find much of this conflict stems from living in a world that profits from us believing our most important contribution to the world is the look of our bodies – not our actions, contributions, and talents. Girls and women are divided against each other by this objectifying culture, but we can unite to fight this damaging system in our family relationships if we choose to. 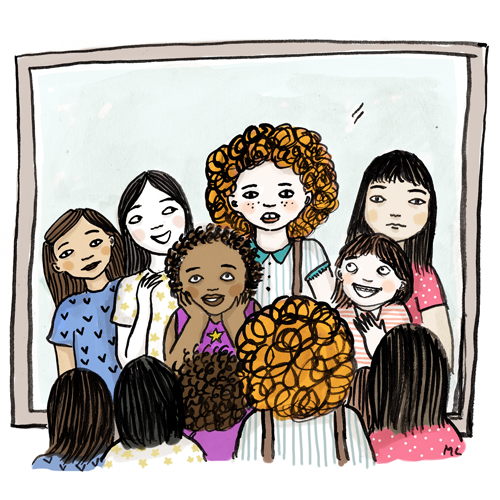 Deborah Tannen, a linguistics professor, analyzed hours of conversations between mothers and daughters as research for her new book, “You’re Wearing That?” Surprise, Surprise! Tannen identifies the 3 most common sources of friction in mother-daughter conversations as: hair, clothes, and weight. Each of these, of course, is related to physical appearance – which reflects the problems women face in our objectifying culture that begs us to believe our value comes from our appearances.

“Women in our culture are judged by appearance far more than men are,” Tannen says in an interview here. “Because women have so many hair- and clothing-related choices — and can expect to be judged for those choices — of course mothers are going to have opinions on which choices their daughters should make. And because mothers want what’s best for their daughters, of course they’re going to express those opinions. And that’s where the caring-criticism conflict arises: what a mother intends as well-meaning advice, a daughter interprets as devastating criticism.”

Ever wonder why so many mother/daughter relationships seem to drown in pain and angst around the time girls become teenagers? Research tells us that about the age girls hit puberty, they are TWICE as likely to experience depression as males. This is directly associated with our objectifying culture, which leads us to evaluate and control our bodies in terms of our sexual desirability above all else. Growing into womanhood means being pushed into a world where our bodies are objectified for others’ profit and pleasure and we are asked to observe ourselves – to self-objectify – every hour of the day to make sure we are appearing in a desirable way for those looking at us. Some of our favorite scholars say that “the habitual body monitoring encouraged by a sexually objectifying culture may reduce women’s quality of life.*” We know this to be true. We also believe this demeaning view of women terrorizes mother-daughter relationships in a particularly brutal way.

Today, my mom is Beauty Redefined’s biggest fan. She believes in this work and is as committed to it as Lindsay and I are. And I’ve learned that I can’t earn my mom’s love — or my own happiness — by changing my looks. We almost never talk about each others’ looks at all these days, on purpose. But during my childhood, I was a little stuck living within a system that taught me I would only be happy and “healthy” if I worked forever to fit unattainable beauty ideals. Though my mom is my closest friend now, my teenage journals revealed a few angry words about her from my past. About the time I started officially growing into womanhood, I couldn’t shake the idea that my mom thought I was a fat, ugly, disappointment. Mom never told me that – she was a great mom who loved me dearly. I interpreted her occasional comments on my looks or clothing (usually in the form of guidance on dressing  more appropriately) as brutal critiques of me as a person. In her well-meaning attempts to help me present my best possible face to a world that can be very harsh to girls, I interpreted the idea that I was disgusting and in need of fixing. My journals from 8th grade on largely recorded lists of why I needed to lose weight, what clothes and makeup I bought or wanted to buy, and food journals for days I was strictly dieting. I truly believed my reflection defined my worth. After arguing with my mom about any number of things, I’d race back to my journal and record entries like this, from June 12, 1999, when I was 14 years old: 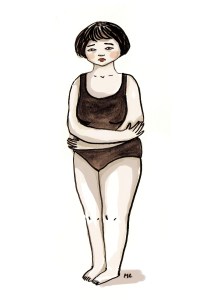 “Mom told me about 100 times today that my shirt was too short and my butt and back were hanging out. I tried to pull down my shirt but I wasn’t home to change all day. She’s told me this about almost every outfit I own, and I know she is implying how huge and fat I am… I’m gonna go on a diet tomorrow and stay on it. I’m not gonna watch TV or sit hardly at all. I’m gonna show her. I’m gonna be skinny, and she won’t have to look at me and think ‘Look at her. She’s SO big,’ like I know she does.”

In my self-conscious teenage state, my mom’s comments, now matter how well-meaning they were, triggered deep feelings of shame in me. Body shame triggers a feeling of wanting to hide or fix our parts that don’t meet certain ideals, and in today’s objectifying world, any looks-based comments from moms to daughters can open the floodgates of shame. Shame is a cruel and powerful demotivator, especially with regard to health and happiness. It fuels overeating, poor nutrition choices, sedentary lifestyles, cosmetic surgery, and broken relationships. Shame is also a cruel and powerful motivator with regard to self-harm. It fuels disordered eating like bingeing, purging and starvation, as well as exercise bulimia, cutting, isolation and pain.

It turns out that the conflicting desires Tannen describes in her study – the mother’s desire to protect vs. the daughter’s desire for approval — set the stage for painful misunderstandings, objectifying messages, and self-objectifying thoughts and behaviors. The well-meaning mother gives advice, and she often feels like she has not only a right but an obligation to say it. She wants things to be as easy and successful as possible for her daughter, but many times, she has often internalized these objectifying, demeaning beauty ideals as “expected” and “necessary.” The approval-seeking daughter takes offense, which triggers body shame, anxiety, anger, and sadness. The bond between mother and daughter chips away each time this pattern takes place.

How do we heal and empower mother/daughter relationships?

In a world that teaches us we are our bodies, moms and daughters can expose this lie for what it is and use their relationship to prove how valuable women are for more than being looked at. The truth is, our bodies are far more important and powerful as instruments for our use than as ornaments to admire from the outside. Getting past the obsession with the outsides of our bodies is key to developing a positive perception of our own bodies, which is the definition of positive body image. Having positive body image isn’t believing you are beautiful. Instead, it is feeling good about your body in general. So many times we confuse “my body” with “how my body looks” and think of them from an outside perspective. Women are more than just bodies, and when we learn to *see more* in ourselves and others, we can *be more* than just objects to look at. 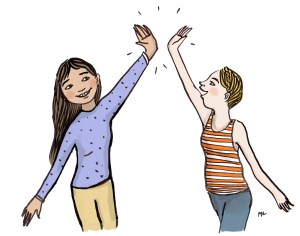 Instead of commenting on your daughters’ appearance, change the conversation. While the temptation to “help” her get ahead in this looks-based, objectifying culture is very real, encouraging her to fix her hair or try a new skincare product or pointing out that weight gain or weight loss will often trigger feelings of body shame and create a wedge between you. Of course it is appropriate for moms to offer guidance to daughters regarding dress and grooming. Where we want to take caution is when the guidance is directed at improving what an outsider sees in your daughter. Instead, advice should focus on how your daughter feels and how she can control the image she presents in any situation, rather than how and why your daughter could improve what others see when they’re watching her. You and your daughter are already bombarded by messages convincing you your body is your most valuable asset and you are worthless without meeting innumerable beauty ideals. Do not buy into those lies. That also means ending all fat talk NOW. If you say something negative about your body or your looks, SHE WILL HEAR. It will negatively affect her view of her own body. That also means being careful of the compliments we give each other. Wade out of the shallow waters of women as bodies alone by complimenting her on her character, her talents, how much you love her, etc. Be your daughters’ most powerful advocate by standing between her and the lies the world throws at her about her value.

Use your bodies as instruments – not objects.

Instead of bonding over beauty products, procedures, and looks-based conversations, improve your body image and verify your worth beyond being looked at by setting a fitness goal together. As mother and daughter, choose a physical activity you both enjoy and set a goal to perform that activity together as often as your schedules allow. Walk around the block every week, take a water aerobics class, do yard work, take dancing lessons, etc. If you can’t do it together, talk on the phone while you do it or email each other to report back on your progress and motivate each other when you can. If your health or abilities do not allow for much physical activity, set a goal to draw, paint, sculpt, sew, sing, play the piano, or write together. Whatever you do, you will strengthen your bond and prove what you are capable of.

Stop Photoshopping ourselves out of reality.

What would happen if confident, beautiful women decided to forego painful and expensive anti-aging procedures, breast lifts and enhancements, liposuction, all-over hair removal or tanning regimens that effectively mimic the Photoshopped ideals we’ve become so accustomed to? How could that change the way your daughter perceives her own body and her own “flawed,” lined, real face? How could simply owning (and treating kindly and speaking nicely about) our so-called “imperfect” bodies affect not only our own lives, but those over whom we have influence? This includes encouraging our daughters to not feel the need to physically Photoshop themselves with products and procedures, too. Is it possible to slowly but deliberately change the perception of these “flaws” as something to shame, hide and fix at any cost to something acceptable and embraceable in all their human, womanly real-ness? We say yes. Read more here.

Whether you are a mom to daughters or you love and care for a girl or woman in any capacity, you have an amazing opportunity to unite as women instead of divide against each other. Be an advocate for other girls and women to show them how valuable they are, no matter what. Stand between them and the lies the world throws at them about their value (or lack thereof) and shelter them from a little of the pain and shame they don’t deserve to feel. Let your relationship be a light on their paths and yours as you move toward a place of empowerment and positive body image.