Vanity Fair-Skinned Only? The Race Issue in the “Hollywood Issue”

I guess the last few years of backlash weren’t enough to convince Vanity Fair to stop whitewashing beauty out of its pages. Here’s a refresher: the “Fresh Faces of 2010” featured a lineup of nine beautiful young stars, all of whom had one noticeable attribute in common: they were all white.

Keep in mind that was the year of Zoe Saldana in “Avatar” and “Star Trek,” Gabourey Sidibe in “Precious” and Freida Pinto of “Slumdog Millionaire,” among many other stunningly talented women of color who shared the Hollywood spotlight. The 2011 issue featured a slight improvement with the inclusion of Rashida Jones, though she was pushed to the far right of the tri-folded cover photo, which means one had to not only open the cover of the magazine, but also unfold the flap, in order to see the one and only woman of color. Perhaps not surprisingly, 2012 fared no better for the two women of color (Paula Patton and Adepero Oduye ) included in this much-anticipated issue, as they were also – you guessed it – relegated to the right side of the folded-over cover. 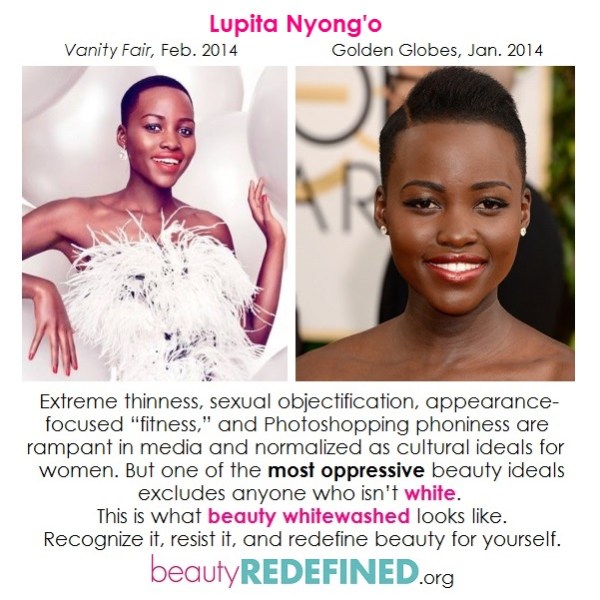 The Feb. 2014 “Vanities” section of the magazine included Oscar nominee Lupita Nyong’o, star of “12 Years a Slave,” though backlash ensued as soon as people were able to compare her digitally lightened magazine-approved skin color to her stunning red carpet photos from the Golden Globes in Jan. 2014.

You’d think that with approximately one-third of the women in the U.S. representing an ethnicity other than Caucasian, media would wake up and catch up – both in terms of writing and offering film roles for women of color and in representing those women positively after they’re stars. In terms of capitalistic common sense, that’s an undeniably large segment of this country’s consumers who don’t see their own races, ethnicities, skin tones, hair colors and styles reflected in mainstream media. Does it matter that women of color are dramatically underrepresented in media, that they’re digitally and physically whitewashed when they do appear in media (by their own choices and the choices of stylists, editors and directors), and that the women we do see almost always already look like white women – with light skin tones, long, straight, lightened hair, digitally lightened eye colors (also achieved through colored contacts), traditionally Anglicized facial features, and slender (and shrinking) bodies? The answer is YES. It does matter. 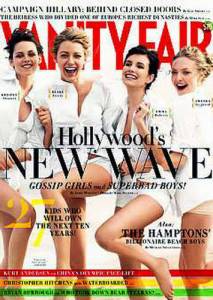 It matters that Vanity Fair essentially refuses to feature a woman of color on the cover of one of their most popular issues of the year that names Hollywood’s newest, most important stars. Consider this in light of their own mission statement: “Vanity Fair is a cultural filter, igniting the global conversation about the people and ideas that matter most…Vanity Fair is the first choice and often the only choice for the world’s most influential and important audience.”

With an audience of 6.76 million readers, the one thing VF has right in their mission statement is that it is undoubtedly influential. But in its role as a “cultural filter,” we’re sorely disappointed to see the diversely beautiful faces of our culture filtered entirely out of the conversation. By repeatedly leaving women of color out of the conversation, and literally out of the picture, VF tells us over and over again exactly who and what “matters most.” 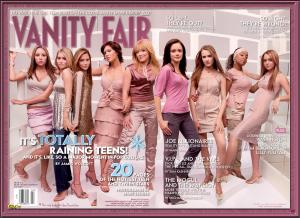 Regardless of the race or ethnicity of the women featured, the constant theme women’s magazines like VF teach readers is that your appearance matters more than anything. Fashion and lifestyle magazines have long been the target of research that demonstrating startling links between media viewing/reading and body hatred, eating disorder symptoms, drive for thinness, and other factors. Research shows us that females’ exposure to the beauty ideals in women’s magazines is consistently related to an increased perception of the importance of beauty and the centrality of physical appearance for women (1). This is achieved through images and editorial content that consistently emphasize thinness, weight loss, and the attainment of what the magazines define as “beauty” in order to achieve personal success, happiness, health and attention from men.

As if unattainably thin ideals (that look completely normal due to repeated exposure) across all genres of media aren’t enough of a strike against women’s perceptions of their own bodies, why don’t we throw in a skin color as the foremost standard of beauty – one that at least a third of the women in this country don’t have. In addition to being extremely thin yet curvaceous in all the “right” places, the beauty ideal presented in mainstream media is almost exclusively white, making it all the more unattainable for women of color. But that doesn’t mean they don’t try. Even with the conspicuous absence of women of color from the highest-selling magazines, real life women of color suffer nearly the same effects as white women from our unrealistic, generally unhealthy, white ideals. 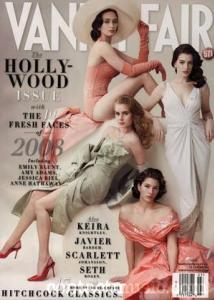 Lots of people assume women of color are more capable of resisting the influence of dominant standards of beauty than white women, but plenty of evidence shows otherwise. In studies where Latina girls under age 18 report greater body satisfaction compared to white girls, they still report comparable or higher rates of disordered eating (2). Latina adolescents frequently describe an ideal body type that is comparable to the white norm and report an interest in weight loss at rates similar to those reported by white peers (3). Same goes for African American females: Scholar Kristen Harrison conducted a study with 61 teenage African American girls, measuring the girls’ “thin ideal” television exposure (shows that emphasize thinness through characters’ bodies and dialogue) and how they thought their classmates expected them to look. She found that the larger girls who were exposed to thin ideal media consistently thought their peers expected them to be smaller than they were. For smaller girls, media exposure was strongly connected to the belief that they needed to gain weight and be larger (Harrison & Gentles, 2006).

Studies like this prove that profit-driven media is working exactly as it is intended to work. Beauty, cosmetic surgery, weight loss, fashion and media industries make billions by sparking and feeding into anxieties in women about their bodies. It’s the classic “grass is always greener” idea – white women need to be darker through tanning and dark women need to be lighter by any means necessary. As long as they can keep women dissatisfied with themselves, they can keep selling us the products and solutions to fix our flaws! Billions of dollars in skin-lightening products are sold worldwide, often by the exact same companies that sell tanning products in the U.S. 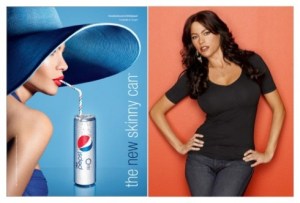 Sofia Vergara, with an arm reportedly Photoshopped to fit the Pepsi “skinny can” ideal

You’ve probably, definitely, noticed that Latinas are represented a little differently in mainstream U.S. media, and they always have been. You know, the ultra-sexy, seductive, curvaceous, va-va-voom, exoticized Latina lover – think Sofia Vergara, Eva Mendes, Eva Longoria, Shakira, Jennifer Lopez, Selma Hayek, Penelope Cruz – the list is seriously endless. In researching the effects of this, young Latina and black women are shown to describe an ideal body shape/size that has more “feminine curves” than the dominant white ideal. Instead of always subscribing to the thin ideal, girls and women of color, in some cases, value a “thick” ideal, comprising a slender but curvy body, with a thin waist, big breasts and hips, and a round behind (4). Greater acculturation into mainstream U.S. culture has been associated with preference for thinner body types among Mexican American women (5), Cuban American women and Latina adolescents. Chamorro and Flores-Ortiz found second-generation Mexican-Americans had the highest levels of disordered eating and acculturation among first- through fifth-generation Mexican Americans (Goodman, 2002). That means girls whose parents came from Mexico are more likely than those whose families had been here longer to starve themselves or binge and purge. THAT is what this culture does to women who have been in this country just long enough to figure out what to do to their bodies in order to fit U.S. ideals. 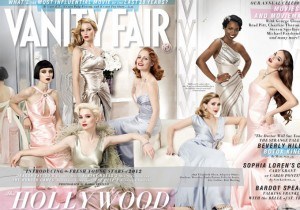 Not too dark, but not too white; not too bodacious up top, but not too flat either; not too skinny, but not too fat. This vicious cycle of “never quite good enough” is fantastic for a consumer culture supporting $100+ billion beauty product and weight loss industries, but it is certainly not conducive to real progress as individuals or as a culture.

Today, the prevalence of body dissatisfaction and related disordered eating is impacting females at younger ages and they are no longer confined to a particular class or ethnic group. Does being aware of the insidious nature of media’s representation of women – really its misrepresentation of women – make any difference? Absolutely. You can recognize and resist those messages that tell us white actresses matter the most, that white features are the most beautiful, that large or small chests are ideal, that you need to be thinner or more curvaceous or that your skin needs to be darker or lighter. Reject and resist messages that treat women as objects to be looked at, judged for their parts and relentlessly flawed. Take the words of awesome Chicana feminist scholar Gloria Anzaldua and consider what progress you can make armed with this knowledge:

“Every increment of consciousness, every step forward is a travesia, a crossing. I am again an alien in new territory. And again, and again. But if I escape conscious awareness, escape ‘knowing,’ I won’t be moving. Knowledge makes me more aware, it makes me more conscious. ‘Knowing’ is painful because after it happens I can’t stay in the same place and be comfortable. I am no longer the same person I was before.” -Anzaldua, 1999, p.70